Alex Pettyfer is a famous English actor and model, best known for his role as Alex Rider in Stormbreaker (2006) and John Smith in I Am Number Four (2011). He is married to a model named Toni.

Alex Pettyfer has been in a number of relationships until now. He was in a romantic relationship with American actress Emma Roberts in 2007. They were together for a year and they separated in 2008.

After that, he started dating another American actress Emily Blunt in 2009 but they failed to keep their relationship for long and broke up in the same year.

In early 2010, he began dating the beautiful America actress and singer, Dianna Agron but their relationship also didn’t last long and they broke up in 2011. After a year, he met Riley Keough, an actress on the sets of Magic Mike and they fell in love with each other.

They also got engaged but they separated in 2012. He was engaged to the beautiful model Marloes Horst. They got engaged in 2016 but later broke up.

This actor is now married. He has exchanged vows with a model Toni Garrn on 02 Oct 2020. 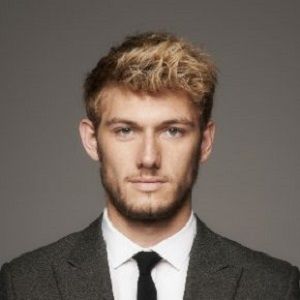 I've learned by watching films that inspired me and people who inspired me like Robert Redford and Paul Newman. I love old school acting. I love subtlety, and I also love being spontaneous, and that's really what works for me.

I've heard I've been called a bad boy, or difficult.

My dad's one of my biggest heroes. I also think Paul Newman's an inspiration. I know a lot of people say that, but I love that he's a great role model and a humanitarian. I admire people who don't necessarily want to change the world, but try to make it a better environment.

Who is Alex Pettyfer?

Alex Pettyfer is a famous English actor and model, best known for his role as Alex Rider in Stormbreaker (2006). He is also famous for portraying the role of John Smith in I Am Number Four (2011).

He is one of the best young and emerging actors in England.

Alex Pettyfer was born Alexander Richard Pettyfer on 10 April 1990, in Stevenage, Hertfordshire, England. Pettyfer holds an English ethnicity and his nationality is British.

He is the only son of English parents, Richard Pettyfer and Lee Robinson. His father is an actor and his mother is an interior designer. His parents divorced when he was a child and his mother re-married Michael Ireland, a property developer.

He has a younger half-brother, James Ireland from his mother’s second marriage. Alex attended various private schools in order to complete his high school education.

He completed his school education in 2006, at the age of 17. Later he attended Sylvia Young Theatre School in London. He was interested in acting from an early age and he loved performing in his school plays.

Alex went to The Mall School, Twickenham, and the Lambrook Haileybury School, Berkshire. He went to a boarding school in Millfield.

He then went to Shiplake college and he learned acting at Sylvia Young Theatre School, London.

Alex Pettyfer began his modeling at the age of six, appearing in a commercial. He began his career as a professional model at the age of seven workings for the American worldwide clothing and accessories retailer, The Gap, Inc. He also appeared in other television commercial brands. At that time, he performed as Willy Wonka in the play, “Jack and the Beanstalk”.

He made his professional acting in 2005, acting in a British television film, Tom Brown’s Schooldays, in which he played the lead character, Tom Brown. His performance was highly appreciated and he received positive reviews for his role. After a year, he starred as Alex Rider in the film Stormbreaker (2006). In 2008, he appeared as Freddie Kingsley in Wild Child. The following year, he appeared as Bradley White in a horror-comedy movie Tormented (2009).

In 2011, he portrayed the lead character, John Smith in I Am Number Four for which he received a huge positive response from the audience. That same year, he appeared in Beastly and In Time. In 2012, he appeared as a young kid, Adam in Magic Mike (2012). In 2014, he played the main character, David Elliot in the romantic movie Endless Love.

Alex Pettyfer: Salary and Net worth

Despite his young age, he has established himself as a successful actor and he has accumulated a net worth of 3.5 million dollars as of 2022, but his salary is not revealed yet.

There are no rumors of Alex dating another woman besides his current relationship. He was in a relationship with the actress Emma Roberts.

He has been a straight and simple guy in his professional life and he has never been linked with any controversy till now.

Moving towards his body measurements, Alex Pettyfer has a good height of 5 Feet 11 Inches (1.81m) with a body weight of 79kg.

His chest size is 42, waist size is 32, and his biceps size is 14. His hair color is blonde and his eye color is green.