Alex Rodriguez is in the limelight for his high-profile affair and lifestyle. He is currently single.

Talking about his personal life, Rodriguez is currently single.

He was engaged to Jennifer Lopez in March 2019. He proposed to her in the Bahamas. However, they called off their engagement in March 2021. The couple started dating in 2017.

He was married to Cynthia Scurtis, a psychology graduate, from 2002 to 2008. They both have two daughters together: Natasha and Ella. Cynthia took divorce from him on the grounds of marital misconduct, extra-marital affairs, and emotional abandonment. 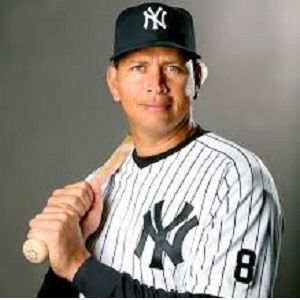 We have realized we are better as friends and look forward to remaining so. We will continue to work together and support each other on our shared businesses and projects. We wish the best for each other and one another’s children. Out of respect for them, the only other comment we have to say is thank you to everyone who has sent kind words and support.

Enjoy your sweat because hard work doesn't guarantee success, but without it you don't have a chance

Who is Alex Rodriguez?

He has been awarded three MVP awards. He is also known as the youngest player to hit 500 career home runs.

He is the son of Victor Rodriguez and Lourdes Navarro. The family-owned a shoe store and lived behind that store. They move to Miami and settled there when he was around 4 years old.

He loved playing baseball and when his father left the family to live in New York, baseball became his sole solace.

At the age of 17, he turned down the University of Miami’s baseball scholarship and instead signed with the Seattle Mariners and became their number one overall pick of the amateur draft in 1993.

Rodriguez made his debut appearance with Seattle Mariners at the age of 18 in 1994, playing shortstop in a game against the Red Sox at Fenway, and in the next year, he had hit his first home run against Kansas City at Kingdome.

In 1995, he was assigned to Seattle’s Triple-A club and was made the starting shortstop of the team. He made it to the cover of Sports Illustrated, with a headline saying “Short Story: Jeter and Rodriguez head up the finest group of short sports since WWII”.

The third baseman had an average of .301, 42 home runs, and 111 RBI. He signed with Texas Rangers in 2001, it was worth 252 million US dollars, the most lucrative sports contract ever in history. Rangers pounded White Sox 16-6, and Rodriguez made his 200th and 201st home runs.

In 2003, he became the youngest player to hit 300 homers and won Babe Ruth Home Run Award. Texas wanted to move him and his contract out and made him available for the trade.

Alex tested positive for performance-enhancing steroids. He was traded to the New York Yankees in 2004 and switched to third base. He had hit .286 with 36 home runs, 106 runs batted in, 112 runs scored, and 28 stolen bases in the first season.

In 2007, Rodriguez had hit his 500th career home run. He was the first and only player in MLB history to ever hit 500 home runs for 3 different teams. He won the Players Choice Award for Outstanding AL Player.

Also, he became a free agent and decided not to be with the Yankees but received criticism for this decision from his fans. He ultimately signed a 10-year contract for 275 million US dollars with the Yankees.

From 2008 to 2009, Rodriguez hit two home runs in the 6th inning that drove in seven runs, setting an American League record for most RBIs and giving him his 12th consecutive season of reaching 30 home runs and 100 RBIs.
He became the 7th player in MLB history to hit 600 home runs and become the youngest player to do so 35 years ago in 2010. He also recorded his 100th RBI.

In 2011, Rodriguez went for arthroscopic surgery on his knee to repair a torn meniscus and was placed on the disabled list. He also faced allegations of being involved in the underground poker games, in which cocaine was explicitly used.

He suffered an injury during the Yankees versus Seattle in 2012. It was a non-displaced fracture; therefore he was on the disabled list again. But before getting injured, he became the 5th player to record 2,000 career strikeouts in MLB history.

In 2013, he went through hip surgery. He is also suspected to be a significant body involved in the Biogenesis baseball scandal. In addition to this, he has been inferred for having used performance-enhancing drugs.

Also, he made his 2013 debut with the Yankees in August, and on the same day, MLB announced he would be banned from the remainder of the 2013 season and the entire 2014 season for his role in the Biogenesis scandal.

His career is full of awards, record-breaking achievements, and accolades but is also clouded with controversies over using performance-enhancing drugs, getting involved with underground poker games, cocaine consumption, etc.

He has always been the favorite topic of tabloid gossip because of his illicit sexual affairs with madams, prostitutes, and exotic dancers.

Recently, he has been banned from the games for 2013 and 2014 for his prominent involvement in the Biogenesis Scandal.

Nonetheless, Rodriguez’s aspiration to outdo greatness and define his time is yet to take his baseball career to greater heights.

His shoe size is 11.5 (US) but his dress size is unknown. He has brown hair color with green eye color.

Also get to know more about the birth facts, education, career, net worth, rumors, height, and social media of different personalities like Omar Vizquel, Derek Jeter, and Stephen Drew.