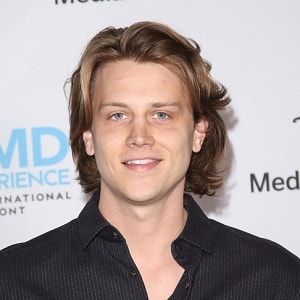 Alex Saxon has been officially dating Santa Monica native of Hannah Marks who is an actress and filmmaker. She has a familiar face of an actress Missy Kallenback. The duo loves to attend parties and seminar together. Recently, they attended the red carpet at Sunset Studios in September 2018.

Hannah shared the snapshot in February 2018, in which she lip-locked with Alex. In return, Alex wrote a caption to that screenshot as “Room may be dim, but that heart is bright”. However, the couple has not shared their future plans but they are enjoying their current relationship.

Who is Alex Saxon?

Alex Saxon is a talented American actor who is best known for his role Wyatt in ‘The Fosters’. He is also well recognized as the role of Max in ‘Finding Carter’. He is also seen in the television series like ‘Awkward’ in 2011, ‘Ray Donovan’ from 2013 to 2015, and ‘The Mentalist’ in 2015.

He was born on September 10, 1987, in Liberty, Missouri, USA. Alex is currently 31 years old. He later shifted to Los Angeles, California. Alex has not provided information regarding his parents, siblings, and his childhood. He began acting in theatres at the age of eight.

Alex holds American citizenship but his ethnicity is unknown.

He completed his education by majoring in Psychology and Applied Critical Thought and Inquiry from William Jewell College. Also, he did minor in Chemistry before he moved to L.A.

He debuted his career from the series ‘Awkward’ in 2011 in which he portrayed the role of Vampire guy in the episode ‘I Am Jenna Hamilton’. He played the character Chloe in the series ‘Ray Donovan’ from 2013 to 2015.

Alex was announced to be hired for a recurring role in ‘The Fosters’ in 2013, which is a Freeform drama created by Peter Paige and Bradley Bredeweg. Later, he got the opportunity to play the role of Max on the MTV drama ‘Finding Carter’.

He was initially hired for the pilot episode of the drama but he was later offered for the recurring role as his performance impressed the showrunner, Terri Minsky. His character was killed off towards the end of the first season but after a month, he was told that the decision had been reversed as his character was so likable in the drama.

He has not been awarded and nominated in his work till date. However, it can be hoped that he will win awards and nominations in the nearest future.

He likes to keep his lips tight and hence, he has not been involved in any types of rumors and controversies in his personal and professional life.