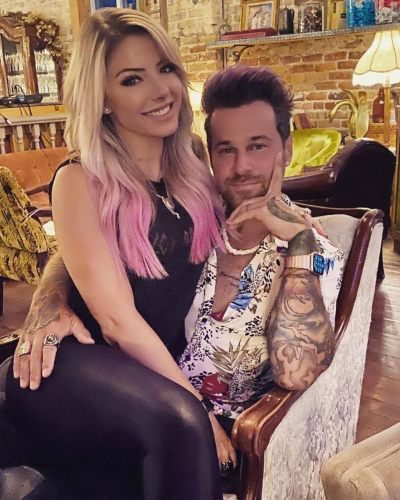 Alexa Bliss and Ryan Cabrera are trend-setter with Ryan wearing an engagement ring. The couple engaged in November 2020 after a year of dating. He proposed to her and recently they were spotted at LAX Airport on 9th July 2021. They both were wearing engagement rings. They were speculated to have married secretly but Bliss confirmed they were not. She said,

Now talking about their wedding, she confirmed that they are planning to have a big wedding. Their wedding will be next year in 2022.

Also read The Miz on Alexa Bliss’ podcast! Watch what he said about his first date and career journey to WWE!

How did the couple meet?

Alexa and Ryan Cabrera met due to their dating rumors. He used to like her tweets after which fans started making rumors of their dating. Likewise, she revealed,

“He was liking some of my tweets and a fan saw that and started a whole Instagram that we were dating and tagged everyone in the company. I had people calling me and texting me and coming up to me saying, oh, you’re dating Ryan. I said, ‘I never met the guy.’”

After that, they started chatting and began good friends. Their friendship turned into a beautiful relationship she wished for. She does not have trust issues and insecurities when she is with him. Also, they are perfect for each other and their relationship has been going really well.

Also read WWE Wrestler Alexa Bliss Is Not Only The Mean Girl Playing Dressed Up!! Nia Jax Shares An Hilarious Story About The Wrestler

Alexis Kaufman is an American professional wrestler. Currently, she is signed to WWE under the ring name Alexa Bliss. Likewise, she is the current Raw Women’s Champion in her second reign. Read more bio…