Updated On January 31, 2023 | Published By: Smriti Sharma
Share this
In Relation 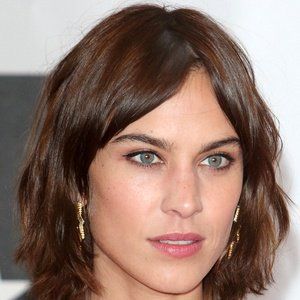 I don't ever want to stop learning. And I really want to learn French fluently. It would be great to go and live in France

I'm always hairy. I swear too much

When I'm wearing makeup, I choose between doing my eyes or mouth because I don't want to look like a beauty pageant child.

What is the relationship of Alexa Chung?

Alexa Chung is dating Orson Fry from May 2019. He is the heir to a chocolate fortune. The couple opened about their affair publicly when they were seen kissing in All Points East Festival in East London’s Victoria Park.

She was in a relationship with Douglas Booth but they separated.

Then, she had an affair with fashion photographer, David Titlow for three and a half years before getting separated in 2006. He is 20 years older than her. He was in a relationship with Ian Watkins but they got separated.

Additionally, she was in a relationship with Faris Badwan the lead singer of the British band The Horrors dated for a while with the model. He is 3 years younger to her.

In addition, she was in a relationship with James Righton, the frontman for the indie rock band The Klaxons dated casually for a short period in 2007.

Chung was also in a 4-year long relationship with Arctic Monkeys frontman Alex Turner from April 2007 until July 2011. The duo lived in both New York and London.

Moreover, Albert Hammond Jr. and Alexa Chung attended a private dinner party together for fashion house Mulberry in Manhattan in 2012 and were rumored to be dating. Alexa and Coldplay lead vocalist Chris Martin were rumored to have had a fling with each other in May 2014 when they both enjoyed their company in the New York bar Elsa.

In May 2015, she started dating Swedish actor, Alexander Skarsgård. After dating for over two years, they called it quits in July 2017 due to the busy schedules of both.

Who is Alexa Chung?

Alexa Chung is a British host, fashion designer, model, and writer. She became most famous from the newspaper column, Girl About Town for the Independent in the United Kingdom. Likely, she is also known as a regular model for Harper’s Bazaar, Elle, and Vogue.

Who are the parents of Alexa Chung?

Alexa Chung was born in Privett, Hampshire, England on  November 5, 1983, and she is currently 38 years old. Her father’s name is Gillian Chung (Graphic Designer) and her mother’s name is Philip Chung (Housewife).

She has three siblings namely, Jamie Chung, Dominic Chung, and Natalie Chung. According to her interviews, growing up, she had a pony and took dancing classes.

She was accepted at King’s College London to study English and Chelsea College of Arts to study art, but at the age of 16 was scouted by a modeling agency before attending.

The talented model was just sixteen years old when she first began her career as a model at the Reading Festival. Likely, she worked as a model for several magazines including Cosmo Girl and Elle Girl. She has worked for the companies of Fanta, Tampax, Sunsilk, and Sony Erosion.

Additionally, Chung started her fashion journalism course and became a television personality. In fact, she became the face of the Australian Fashion Label Antipodium’s SS 2008 collection. In June 2010 she appeared in TV and print advertising campaigns for, a French clothing campaign.

The renowned television personality also began her television career as a co-host of pop world on channel 4 which was based on the musical show. She presented a weekly radio show, Pop World radio along with Alex Zane, a radio and television presenter.

Likewise, she was the four anchors of the T4 presenters and hosted a reality show entitled T4’s vanity Lair, a beauty show.

Moreover, she worked as a reporter on channel 4’s Gok’s Fashion Fix and got an opportunity to take interviews with popular stars including Jean Paul Gaultier, Roberto Cavalli, and Christain Lacroix. In addition, she hosted a T4 Fashion and music show named Frock Me along with Henry Holland, a fashion designer.

Apart from acting and modeling she also wrote a monthly column for British Women’s Magazine company and served as a contributing editor for British Vogue.

She has an estimated net worth of around $12 million as of 2022, earned from her professional career.

Alexa often used to be a topic of rumors because of her on-and-off relationship with many women. However, there are no desperate rumors regarding her personal and professional life currently.

How tall is Alexa Chung?

Also, read the affair, salary, the net worth, controversy, and the bio of Ella Ross, Emily Sandberg, Naomi Campbell