Alexa Dectis is a TV actress, songwriter, and public speaker who uses a wheelchair.

There is no record of any relationship that Alexa Dectis has been involved in. Currently, she is not dating anyone.

Furthermore, she has not spoken regarding the matter with anyone. 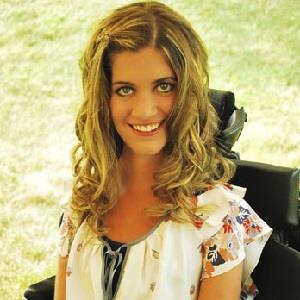 Since age 5, she has been an ambassador for the Muscular Dystrophy Association. She is affected by type 2 spinal muscular atrophy hence she uses a wheelchair.

Alexa was born in Allentown, Pennsylvania on March 5, 1993. She got diagnosed with Spinal Muscular Atrophy at 16 months and has been in an electric wheelchair since age two.

Despite her disability, she began acting in her childhood years. She is of American nationality. Additionally, she has not revealed information relating to her ethnic background as of now.

She spent most of her early life acting, songwriting, and singing.

Talking about her education, Alexa graduated from George Washington University in May 2015. In college, she became a member of the Kappa Delta sorority. Currently, she is currently in law school.

Alexa is an in-demand public speaker, writer, and motivational coach. She has spoken to crowds of thousands and consistently helps audience members recognize their potential, overcome obstacles, and find their purpose in life.

Furthermore, she has been an inspirational figure to hundreds and thousands of children with disabilities around the world.

Alexa has not revealed her current salary. She has an estimated net worth of around $1.3 million.

Alexa has successfully kept her life and career away from the media spotlight. She has not been part of any notable controversies to date.

Currently, there are no rumors concerning Alexa and her career.

There is no detailed information relating to Alexa’s height and weight.

Her hair color is blonde and eye color is dark brown.

Also get to know more about the birth facts, education, career, net worth, rumors, height, social media of different personalities like Rita Wilson and Reba McEntire.