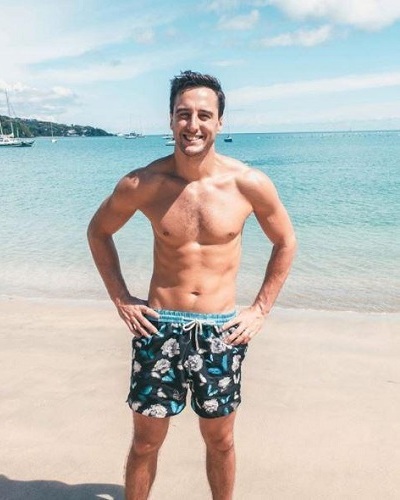 Dancing on Ice star Alexander Demetriou is a British professional figure skater. He entered the show in 2019 and is also in this season of it. But not many know about his career and personal life which is hence outlined below.

Read on to know about him.

Alexander Demetriou and his birth, age, and life beginnings

The figure skater Alexander Demetriou was born in Blackpool, North West England. His current age is 28 years. He had a passion for ice skating and grew up on the ice rink.

Later, he decided to choose it as a vocation. Besides this, there is nothing more known about his education, birth family, and parents.

In 2013, Alexander got an opportunity on the tour of Disney on Ice called Passport to Adventure. He played the role of Captain Hook.

While on this show, he had aired his desire to take part in the show Dancing on Ice. He also expressed that he wanted Natalie Portman as his dance partner.

His dream came true when he was selected for the 2019 series of Dancing on Ice. His dance partner on it was Pussycat Doll Melody Thornton.

Though the pair could not win the show, they got fifth position in the dance competition. And in 2020, he is paired with Maura Higgins.

The personal life of Alexander

Alexander is married and his wife is also on the show. Her name is Carlotta Edwards,  31 and she is Canadian. Carlotta also joined the same show Dancing on Ice in 2019 and at that time, she was with ex-Eastenders actor Richard Blackwood.

The pair, Alexander and Carlotta met when they were giving performances on the show Disney on Ice. They both were just 19 years old at that time. Though on the show, their dance partners were different individuals and not each other. But it was destiny that brought them together. They got to pair on the show as well as in real life.

They dated for some time before Alexander proposed to her in Brazil in 2014. And months later in the same year, they walked down the aisle together in a grand ceremony held in Huntsville, Alabama. They chanced several skating jobs together including on a Royal Caribbean cruise ship.

The couple loved traveling and used to upload their beautiful pics together on their social media. But there is now news that their marriage has collapsed and they have divorced.

Last weekend, Alexander Demetriou was spotted leaving the home of Maura Higgins,  29. Soon, rumors were circulating that the two are dating. This made headlines since Maura has recently split from Curtis Pritchard.

But Maura spoke out against these rumors. She vehemently denied any affair with the married Alexander stating that they are just friends.

“YES I have more male friends than female! GET OVER IT!!!”