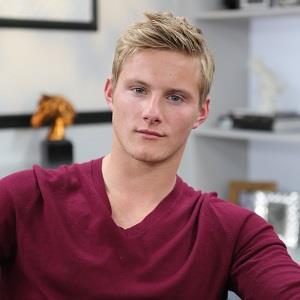 My Heart lies in music and acting, however, my inspiration comes from adrenaline rush l get from sports... and life.

My parents know how passionate I've always been about acting. I convinced them this was something that i was going to put my heart and soul into.

Alexander Ludwig started dating his ‘Race to Witch Mountain’ co-star AnnaSophia Robb in August 2008. The relationship went until July 2011. Next, he briefly dated ‘The Hunger Games’ co-star Leven Rambin in 2012 from January to March.

Ludwig commenced dating Boston-based model, Nicole in August 2012. The youngsters met during 2012 movie ‘Grown Ups 2’. They have been clicked together many a time at beaches. The couple split in July 2014. Recently, in 2016, he was in a relationship with alpine ski racer Lindsey Vonn. Currently, he is believed to be single.

Who is Alexander Ludwig?

Alexander Ludwig is a Canadian actor, singer, and model. He has appeared in movies including ‘The Seeker: The Dark Is Rising’ and ‘The Hunger Games’. At present, he appears in the History Channel series ‘Vikings’.

Ludwig was born in Vancouver, Canada on May 7, 1992, to parents Sharlene Martin and Harald Ludwig. Additionally, he has three younger siblings: a sister and brother named Nicholas and Natalie, who are twins, and a younger sister, Sophia.

He was interested in the world of acting since his early life and had to convince his parents to support his desire to pursue a career as a child actor. He is of Canadian nationality. Furthermore, he belongs to a mixed ethnic background of German, Belgian, English, Scottish, some German and Jersey/Channel Islander.

Talking about his education, Ludwig is enrolled as a theatre major at the University of Southern California where he is in the Phi Kappa Psi fraternity and lives full-time in Los Angeles. Furthermore, previously, he attended Collingwood School.

Ludwig initially began his career at the age of nine when he featured in a Harry Potter toy commercial. Next, he was cast in movies such as ‘Air Bud: World Pup’ and ‘ Scary Godmother: The Revenge of Jimmy’. Since then, he has appeared in numerous movies, television series, and videos. All in all, he has more than 15 credits as an actor.

Some other movies and television series that Ludwig has appeared in are ‘Swerve’, ‘Blackway’, ‘Final Girl’, ‘The Final Girls’, ‘When the Game Stands Tall’, ‘Lone Survivor’, ‘Grown Ups 2’, ‘The Hunger Games’, ‘Race to Witch Mountain’, ‘The Seeker: The Dark Is Rising’, and ‘A Little Thing Called Murder’ among others.  Furthermore, he was a competitive freestyle skier and has participated in skydiving. Apart from his acting career, he released his first single “Live It Up (Teenage Wasteland)” on March 1, 2012.

Ludwig garnered the Golden Maple Awards nomination in 2015 for ‘Vikings’. Additionally, he won the MTV Movie Award and Teen Choice Award in 2012. He has 2 wins and 2 nominations to his name as an actor.

Ludwig has not revealed his current salary. However, he has an estimated net worth of around $ 3 million.

Ludwig became part of a controversy after he was involved in underage drinking controversy. Apart from this, he has not been part of any other notable controversies to date. At present, there are no rumors concerning Ludwig and his career.