Updated On December 27, 2022 | Published By: Thomas Gregory
Share this
In Relation 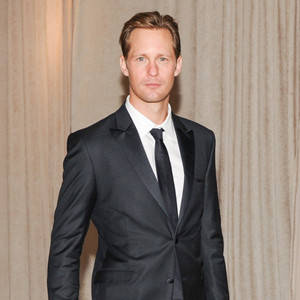 As an actor, what's interesting is what's hidden away beneath the surface. You want to be like a duck on a pond - very calm on the surface but paddling away like crazy underneath

There's something I love about how stark the contrast is between January and June in Sweden. In a way, I feel that time doesn't exist in LA. Sometimes I don't know if it's February or April or October, because you're always sitting outside on the same patio, and it's 70 degrees

Life isn't one-dimensional. The world isn't simply divided into good versus evil. I think we're all capable of both.

Tall and handsome, Alexander is an unmarried person and is currently in relation to British model and fashion journalist Alexa Chung since 2015.

Who has he dated in the past?

He has been in relation to a number of women in past including Katie Holmes in 2014, Izabella Miko in 2009, and Evan Rachel Wood during the year from 2009 to 2010. Alexander is not associated with a divorce case yet.

Who is Alexander Skarsgard?

Alexander Skarsgard is a popular Swedish actor. He is extremely prominent for his role as ‘vampire Eric Northman’ on the HBO series “True Blood”.

He is also known as the son of Swedish actor Stellan Skarsgård.

Alexander was born to Stellan Skarsgård and My Agnes on August 25, 1976, in Stockholm, Sweden.

His nationality is European and belongs to the Swedish ethnicity.

He has raised up by his parents in a friendly and entertaining environment along with his five younger siblings named Gustaf, Sam, Bill, Eija, and Valter, and two half-brothers, Ossian and Kolbjörn.

His father is the first and foremost encourager for him to secure his career in the entertainment (mainly acting) field and he was also highly interested and dedicated. He also served in the Swedish military for 18 months.

Concerning about his educational background, he attended Leeds Beckett University in England for six months.

Later on, he also attended Marymount Manhattan College and did a theater course.

After attending theater classes for several months, Alexander moved to New York to pursue his dreams.

He made his professional debut in acting in the year 1984 and appeared in a film titled “Åke and His World” as ‘Kalle Nubb’.

Also, he played in several low-rated films during the initial phase of his career including “The Dog That Smiled”,  “Happy End”,” The Dog Trick”, etc.

In the year 2003, he worked as a director in the film “To Kill a Child” for which he won the ‘Odense International Film Festival’ twice in different categories.

One of the successful series in lifetime career until now is “True Blood” (2008-2014) for which he won different awards including ‘Scream Award’ (thrice), ‘Satellite Awards’, ‘Robert Award’ and nominated for more than six awards.

He gets paid a good amount of money from different movies and TV (films and series).

Alexander Skarsgard: Salary and Net Worth

He has accumulated a net worth of‎ $14 million as of 2022. But there is no information regarding his salary.

Alexander Skarsgard: Rumors and Net Worth

Hoften used to be a topic of rumor due to his on-and-off relationship status with a number of women; however, he is not associated with drastic rumors currently.

His body weighs 89kg. He has brown hair and blue eyes.