Talking about her relationship details, Alexandra Billings is happily living a married life with her wife, Chrisanne. The couple initially met at age fourteen in drama class.

Later, they tied the knot in a commitment ceremony in Chicago on 4 December 1995. Billings has openly stated she is a transgender woman. She began her male-to-female transition in 1980. Sadly, Alexandra has been living with HIV since 1985 and has been an advocate for HIV health initiatives, as well as trans issue and trans rights. 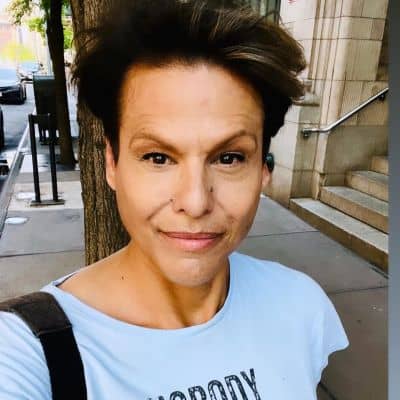 Who is Alexandra Billings?

Billings is widely famed as the second openly transgender woman to have played a transgender character on television in Romy and Michele: In the Beginning.

Moreover, she is also known for her acting in the Amazon series Transparent which also featured the transgender character in ER, Eli Stone, How to Get Away with Murder, Grey’s Anatomy, and The Conners.

Alexandra Billings was born on 28 March 1962. At present, she is 60 years young star. Likewise, her birthplace is Schaumburg, Illinois, the USA.

Alexandra is the daughter of her father, Robert Billings whereas her mother’s details are still unknown to the public.

Talking about her nationality, Billings holds an American identity whereas her ethnicity is European American, and African-American.

Regarding education, the actress earned her MFA from CSULB and pitched the commencement speech for CSULB College of the Arts in 2015. Billings is a theater professor at the University of Southern California in Lost Angeles. Earlier, she worked as an assistant professor at California State University.

Alexandra is a multi-talented personality and has worked as an actress, teacher, activist, and singer. Initially, she worked on the stage name Shante at the famed Baton Show Lounge in Chicago, Illinois.

The actress has won a number of beauty contests including the titles of Miss Wisconsin, Miss New York, Miss Chicago, Miss Illinois, and Miss Florida.

Moreover, Billings has also received one Joseph Jefferson Award and five After Dark Awards for her work in Chicago Theatre.

She is also a professional singer who performs in theaters and nightclubs throughout the United States. The singer recorded her second CD The Story Goes On in 2003.

In 2010, Alexandra featured in the film FAUX, in which she commented on gay marriage spurring the economy.  She also worked on season two, episode six of How to Get Away with Murder as Professor Jill Hartford.

A famed personality, Billings has earned a handsome amount of money from her profession. She has been active in her profession from the year 2002 till the present.

It is reported that Alexandra Billings has an estimated net worth of $5 million.

However, the activist has not disclosed her exact salary, earnings, and assets details till now.

Alexandra has never been part of any controversial matter or rumors till now. The star has been preoccupied with her professional and private life.

It seems that Billings prefers enjoying her personal life and does not want to merge it with her professional life.

60 years young star, Alexandra has beautiful looks and an admirable personality. She stands at a height of 5feet 6inches. Also, she has a balanced body weight of 60 kg.

Furthermore, Billings has brown eyes whereas her hair is brown. Her body measurement is 36-26-34 inches(chest-waist-hip) respectively.

Alexandra Billings is an active personality on social media regarding her social media presence. Alexandra has more than 67.4k followers on her official Instagram account @therealalexandrabillings.

She is also active on Twitter with around 5k followers.

Moreover, Billings is also available on Facebook at the moment.