Alexandra Cooper is an American vlogger, podcaster, Instagram personality. She is known as the co-host of a trending podcast called “Call Her Daddy” alongside Sofia Franklyn.

In February 2021, Alexandra revealed that she was dating and called him Mr. Sexy Zoom Man. She hasn’t disclosed who he is but stated that she went out on a date with an actor who works in an NBC show and described him as extremely sweet.

Alexandra dated Noah Syndergaard, a basketball star, and called it quits this year.

Alexandra had a one-time thing with another podcaster, Logan Paul. 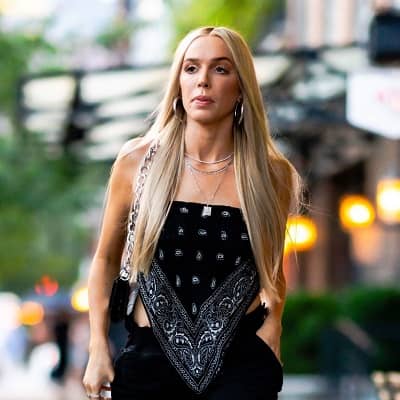 Who is Alexandra Cooper?

Alexandra Cooper is an American vlogger, podcaster, Instagram personality, and is known as the co-host of a trending podcast called “Call Her Daddy” alongside Sofia Franklyn.

Alexandra Cooper, age 26, was born on August 21, 1994, in Newtown, Pennsylvania, USA.  Her nationality is American.

Alexandra has two siblings Grant Cooper, Kathryn Cooper. Her parents are Bryan Cooper, who used to play hockey at the University of Wisconsin, and Laurie Cooper.

Alexandra Attended Pennington High School in her hometown. She secured a scholarship at Boston University and graduated with a degree in film and television.

Alexandra was a competitive athlete. She was also a player on Division 1 women’s soccer team. She was also a co-captain as a senior and led the team to four MCT Championships.

Alexandra and her team won the Prep-A title for all four seasons. She also won Prep First Team and All-Area First Team credit as a junior and senior.

Alexandra is known as an On-Air studio anchor with “Dirty Water Media” in 2016.

In 2018, Alexandra launched a podcast titled “Call Her Daddy” with her co-host Sofia Franklin. Their first episode was published on October 3, 2018.

They discussed things like sex, explicit stories and provided sexual advice in their podcast. Their podcast is to have an open space to talk about sex openly and freely.

Alexandra also created a YouTube Channel on 29th September 2016. She enlightened her followers about the events of her life on YouTube.

Alexandra got nominated as Favorite Pop Podcaster in People’s Choice Awards in 2020.

Alexandra has earned a lot from her career as a podcaster and blogger. She has been working in this field for more than 5 years.

There was a rumor going around that Alexandra and Logan Paul hooked up once which was later admitted by cooper that it was a one-time thing. They fought over in their podcasts.

The podcast named “Call Her Daddy” hosted by Alexandra and Sofia started facing issues in early 2020 when rumors were swirling that the two of them were fighting and trying to find deals for the show outside of its home n Barstool Sports.

Alexandra’s height is around 5 feet 8 inches and she weighs around 59kg. she has blonde hair with blue eyes.