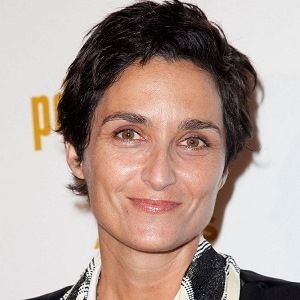 I am a photographer. I'm an artist. I'm interested in directing. My photography is what I am mostly concentrated on now and have been for years.

I definitely think that they should watch something else. There are so many channels on television. It's easy, if you don't like The L Word, go watch CSI: Crime Scene Investigation (2000) or perhaps, The Sopranos (1999) or... I don't think it's on anymore. To each her own. It's funny... I think sometimes when lesbians have a certain reaction to The L Word, there's such a need to be represented. It's just one show. It's one show. It would be like all doctors in the world being upset because they're not represented by one show [like] ER (1994).

I have to do my photography because that's my work and it makes me so happy.

Alexandra Hedison is a lesbian. For over 3 years, she dated the popular talk show host Ellen DeGeneres but their relationship ended in 2004. Alexandra got married to the famous actress Jodie Foster on 2014 April 20, after dating for about a year.

Alexandra’s wife Jodie was formerly in a relationship with the producer Cydney Bernard and they had two children together.

Who is Alexandra Hedison?

Alexandra Hedison is an American photographer, actress, and director. She is also known for publishing a series of books related to photography and art.

Alexandra Hedison was born in Los Angeles, California, the United States on July 10, 1969, and she is currently 49 years old. Her father’s name is David Hedison and her mother’s name is Bridget Hedison.

Talking about Alexandra’s education history, she attended the State University of New York at Purchase and the University of California, Los Angeles (UCLA).

Talking about her profession, as a photographer, in 2005, she exhibited the (Re)Building series, which addressed themes of loss, transition, and recovery while using construction as a metaphor for memory in the architecture of the subconscious.

In the year 2009 Hedison published a series of books sponsored by the Center of Cultural Intelligence in Singapore. During 2009, the Ithaka series was exhibited at Frank Pictures Gallery in Santa Monica, California. On the same year, Hedison showed Ithaka in a solo exhibit at Mews 42 Gallery in London, UK.

She has an estimated net worth of around $1.5 million (as per 2019 data) and she has earned that sum of money from her professional career. However, her spouse Jodie has a net worth of $100 million.

Alexandra Hedison has a height of 5 feet 10 inches. Additionally, she weighs 62Kg. Alexandra’s hair color is brown and her eye color is hazel.

Also, read the affair, salary, the net worth, controversy, and the bio of Trey Ratcliff, Missy Margera, Chaz Dean

The 11th wedding anniversary of Ellen DeGeneres and Portia de Rossi this August! Are they heading for a divorce anytime soon?