Alexandra Kay is a well-recognized American country singer. She is married to her longtime partner, Indiana Touchette. 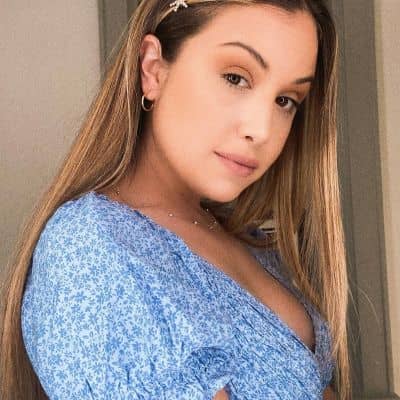 Talking about her relationship details, Alexandra Kay is a married woman. She is married to her longtime partner, Indiana Touchette.

The couple dated for more than a decade before exchanging the ring on 25 September 2021. They married in an intimate ceremony at A Pocket Full of Sunshine in Mt. Vernon, Illinois.

The couple enjoyed a mini-moon in St. Louis celebrating with a pool and spa day followed and later dinner at Carmine Steakhouse after their wedding. They are planning their honeymoon in Santorini, Greece.

Who is Alexandra Kay?

Alexandra Kay is a well-recognized American country singer. Kay is widely famed after gaining success for her debut single, No More that has more than 500k views on YouTube.

Moreover, she has more than 583k followers on her official Facebook page.

Alexandra Kay was born on 5 September 1991. At present, she is 30 years young talent. Likewise, her birthplace is Missouri, the USA.

Not much is known about her father and mother’s details, Alexandra has been secretive towards her family details. Moreover, she has two sisters.

Talking about her nationality, Kay holds an American identity whereas her ethnicity is unknown.

Regarding education, the singer might have completed her graduation from the university of the town. She has not mentioned her academic background to the public.

Starting her career at the age of 15, Alexandra grew with a competitive nature, learning discipline, and developing her work ethic during her year of struggle. She eventually quit college scholarships to run after her music career.

She started her career with some commercial acts and voice over. After performing in multiple musical theater productions, Kay decided to try her luck as a contestant on American Idol in 2011.

The artist then performed hip hop and R&B in early 2012. Her first single “No More” was a radio hit spending three weeks at #1 on the New Music Weekly Top 40 pop chart.

Additionally, it scored top of Hot AC and Hot 100 charts. Then, she began recording cover videos of many 90s country music favorites and post them on her Facebook page. Kay quickly gained high attention there and has more than 583k followers on her Facebook.

Alexandra then appeared on NBC The Voice and also performed a role in the Netflix Original Series, Westside. It also reached number one place on the iTunes country chart. The artist then release her second and third singles titled, I Kinda Don’t and All The Cowboys.

A famed singer, Kay has earned a handsome amount of money from her profession. She lives a quality lifestyle along with her family.

It is reported that Alexandra Kay has an estimated net worth of $1 million.

However, the star singer has not disclosed her exact salary, earnings, and assets details till now.

Alexandra has never been part of any controversial matter or rumors till now. The country singer has been preoccupied with her professional and private life.

It seems that Kay prefers enjoying her personal life and does not want to merge it with her professional life.

30 years old star, Alexandra has beautiful looks and an admirable personality. She has not mentioned her exact height but seems to be more than 5 feet tall.

Furthermore, Kay has brown eyes whereas her hair is brunette.

Nevertheless, the famed singer has never mentioned other physical details in the public yet.

Regarding her social media presence, Alexandra Kay is an active personality on social media. Alexandra has more than 164k followers on her official Instagram account @alexandrakaymusic.

She is also active on Twitter with around 6k followers. The star is also available on YouTube with more than 47k subscribers on her channel.

Moreover, Kay is also available on Facebook with nearly 583k fans and supporters. The artist has more than 2.4 million followers on her official TikTok account.