Alexandra Krosney is an American film and television actress. She is possibly single.

Alexandra Krosney is living a single life and she is focusing on her career. Also, even if she is dating someone, she has not revealed anything about it.

She doesn’t share her personal and professional life in public. Moreover, she has not yet been spotted with anyone in public places. 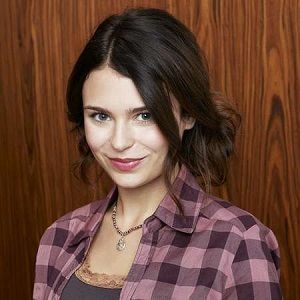 Who is Alexandra Krosney?

Alexandra Krosney is an American film and television actress. She is well known for her role as Kristin Baxter on the ABC sitcom Last Man Standing during the show’s first season.

Alexandra Krosney was born in Los Angeles, California, the United States on January 28, 1988, there is no information about her family.

Whereas, there is no information regarding her siblings. She belongs to American nationality and English ethnicity. Her birth sign is Aquarius.

Also even, there is no information about her education and academic achievements.

On talking about her profession, at the age of 14, Alexandra Krosney put her step on her acting career in 2002. Similarly, she kicked off her career from a pilot episode of an American TV series, The Grubbs.

In 2006, she also starred in the TV movie, Read it and Weeps as Harmony. Besides that, from 2010-12, she also voiced the 3 episodes of an animated series Transformers: Prime. In 2011, she finally bagged the significant role of Kristin Baxter on the ABC sitcom, Last Man Standing.

She also appeared alongside Nick Jones, Tim Allen, Nancy Travis, and Kaitlyn Dever, among others in the series.  Moreover, she also appeared in the first season of the show (Last Man Standing).

Likewise, she also played the recurring role of Rhonda in the TV series, Surviving Suburbia. Whereas, from 2010 to 2012, she also provided her voice to Transformers: Prime as the character Sierra. Similarly, in  2013, she also appeared in a minor role in the short film, The Pinhole Effect.

There is no information about her salary. Her net worth is around $ 1 million as of 2022.

There is no such controversy and rumors related to his professional and personal life. She is far from rumors and controversy.

On talking about her body measurements, Alexandra Krosney has a height of 5 feet 5 inches. Additionally, she weighs is 56Kg. In addition, she has a measurement of 30-23-32 inches respectively.