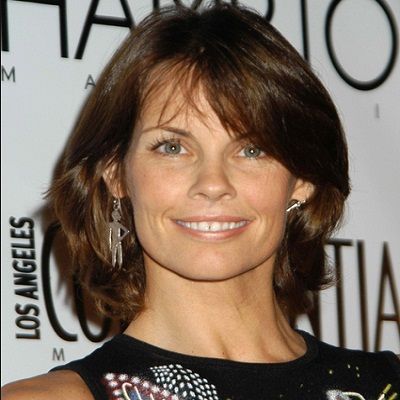 I can finish an Ironman, I can take 5 days in jail for civil disobedience, I can shoot in the toughest conditions imaginable, but I cannot seem to resist chocolate at 10pm.

Alexandra Paul married on September 16, 2000. She met her husband, Ian at the age of 32. She is childless by her choice. She chose since her childhood days.

According to her, she was not going to have her children because there are too many children in the world.

However, her decision to not having a child has not affected her relationships and career. She is living a happy marital life with her husband.

Who is Alexandra Paul?

Alexandra Paul is an American activist, actress, health coach, and a former model. Likely, she is well known for her role in John Carpenter’s horror movie entitled Christine.

Furthermore, she appeared in several other movies including 8 Million Ways to Die, Dragnet, and American Flyers.

Alexandra Paul was born in New York City, New York, the United States on July 29, 1963. Her birth name is  Alexandra Elizabeth Paul and she is currently 57 years old.

She has two siblings namely, Caroline Paul and Jonathan Paul. Alexandra holds American citizenship, but her ethnicity is unknown. Her birth sign is Leo.

Talking about Alexandra’s education history, she studied at the ‘Cornwall Consolidated School’ and the ‘Groton School’ in Massachusetts. Although she was accepted into ‘Stanford University’.

Talking about her profession, Alexandra Paul commenced her career with modeling in New York City. She eventually resolved to pursue acting and thus relocated to Los Angeles.

Whereas, her first major role was that of ‘Leigh Cabot’ in the 1983-released commercially hit supernatural-horror film ‘Christine.’ Following this, she starred in several other films. These include the sports drama ‘American Flyers’ (1985), with Kevin Costner; the crime thriller ‘8 Million Ways to Die’ (1986), with Jeff Bridges and Rosanna Arquette; and the buddy-cop comedy ‘Dragnet’ (1987), with Dan Aykroyd and Tom Hanks.

Likewise, one of her most memorable portrayals was that of ‘Lt. Stephanie Holden’ in the action–drama TV series ‘Baywatch.’ She featured in the series from 1992 to 1997 and reprised the role in an episode of its spin-off, ‘Baywatch Nights’ (1997), and in the action-drama film ‘Baywatch: Forbidden Paradise’ (1995).

Similarly, she hosted the extreme sports series ‘Wild Waters’ for 4 years and the series ‘Winning Women’ for two seasons. She co-hosted the environmental TV talk show ‘Earth Talk Today’ for 150 episodes in 2008. The documentary ‘Jampacked’ that focused on the global population crisis was co-written and co-produced by Alexandra and won a ‘Bronze Apple Award.’

It also earned recognition at the ‘EarthVision Environmental Film and Video Festival.’ Another documentary co-written and co-produced by her, titled ‘The Cost of Cool: Finding Happiness in a Materialistic World,’ earned a ‘CINE Golden Eagle Award.’
Alexandra also produced eight PSAs on the benefits of driving electric vehicles for the non-profit educational organization ‘Plug-In America.’

She won the ‘Indie Series Award’ for the ‘Best Supporting Actress’ for playing ‘Alexandra’ in ‘Mentor’ (2013).

This actress has an estimated net worth of around $4 million and she has earned that sum of money from her professional career.

She was arrested for civil disobedience over a dozen times at the Nevada Test Site between 1987 and 2000.

Her hair color is dark brown and her eyes color is hazel.