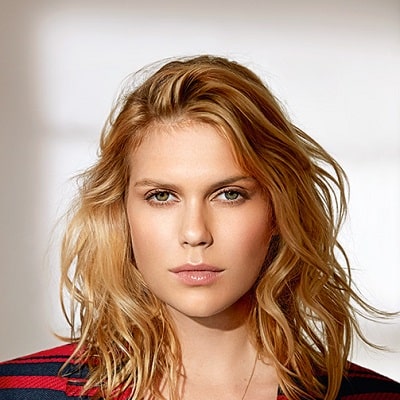 Alexandra Richards is a married woman. She married her longtime boyfriend Jacques Naude, a South African visual artist and filmmaker in Connecticut on 9 September 2019.

She and her husband are yet to share their plans on welcoming children. They are currently living without rumors of extra-marital affairs and divorce.

Who is Alexandra Richards?

Alexandra Richards is an American model, artist, and  DJ. She is the daughter of Rolling Stones guitarist Keith Richards, supermodel and actress Patti Hansen and sister of model Theodora Richards.

She was born on July 28, 1986, in New York City, New York, USA. She was born as Alexandra Nicole Richards. She was born to mother Patti Hansen, a supermodel and actress and father Keith Richards, Rolling Stones guitarist.

Furthermore, she has worked with Burberry, Dior and Abercrombie, Dolce & Gabbana, Jill Stuart, and Matthew Williamson.

She started her career as a DJ. She started earning her name by playing at Bungalow 8, Beatrice Inn, 1OAK, Tao, Avenue, and Goldbar after learning to DJ from friends around the city.

Furthermore, she has also curated the sounds for special events with clients such as YSL, Victoria’s Secret, Ralph Lauren, Tiffany & Co., Veuve Cliquot, and Samsung. Alexandra has produced her own music and uploads it on her Soundcloud page.

Both her net worth and annual salary are under review and will soon be updated.

Alexandra Richards has a height of 5 ft 9 inches and weighs average. Also, she has green eyes and dark blonde hair. Her body measurement is 33-25-34 inches and her bra size is 33B.

To know more about Donny Osmond, Tessa Netting, and Yu Darvish, please click on the link.