American Alexandria Ocasio-Cortez is a politician. 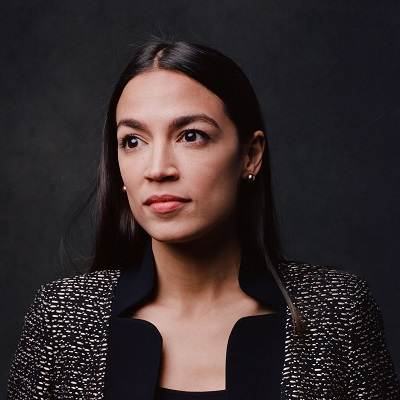 Alexandria Ocasio-Cortez is dating Riley Roberts. Her boyfriend, Riley is a web developer by profession.

The couple first met each other when both of them were studying at Boston University. Later, the couple started seeing each other and eventually started dating.

As of now, the couple has not shared any details regarding their private life and their future planning of getting married. However, there is the news that her mother, Blanca wants her to get married soon.

Who Is Alexandria Ocasio-Cortez?

American Alexandria Ocasio-Cortez is a politician. Cortez is popular as the U.S Representative for New York’s 14th congressional district.

Also, she happens to be the youngest woman ever to serve in the United States Congress.

Alexandria Ocasio-Cortez was born on 3rd January in 1989 in New York City, New York in a Catholic family. She is of Spanish ethnicity with Taino Indians, Spanish colonizers, Jewish ancestry.

Along with her family, she moved to Yorktown Height from Parkchester when she was five years old. Moving towards her academics, she completed her High School education at Yorktown High School.

In 2008, she joined Boston University. The year, she lost her father, Sergio due to lung cancer. In 2011, she graduated from the university with Honors in Arts majored in economics and international relations.

– She started her career as a bartender and waitress to help her mother. Later, she started her own Brook Avenue Press. Also, she got associated with the nonprofit, National Hispanic Institute.

– In 2016, she worked as an organizer for the primary election for Bernie Sander’s presidential campaign. Following the general election, she traveled throughout American including the places like Flint, North Dakota, and Michigan. There, she spoke on the Flint water crisis and Dakota Access Pipeline.

– In 2017, she received the National Hispanic Institute Person of the Year. In June of the year, she first announced her candidacy during an interview with Jimmy Dore.

– After that, in April 2018, she started her campaign while waiting tables and tending the bar at Flats Fix. She became the first person to challenge Joe Crowley. In the campaign, she was at a major disadvantage due to the lack of finances for the campaign.

– On 15th June 2018, she encountered Crowley face to face at the local political talk show, Inside City Hall during the campaign. On 26th June, she won the primary election against Joe with 57.13%. Her victory created headlines in the world of politics as Joe remained undefeated for the position for 10 years.

– In the 2020 campaign, she was challenged by the American Journalist and former political candidate, Michelle Caruso-Cabrara in the Democratic Primary. She won the nomination. After that, she was re-elected as the U.S representative for the region once more defeating the Republican Challengers nominee John Cummings and Antoine Tucker.

– On 20th October 2020, she hosted the social deduction game, Among Us on Twitch.

As of 2021, she has an estimated net worth of $1 million. Her earnings as the United States Representative are in the range of $173k per annum.

She has been in the headlines when an incident was reported on July 20, 2020. As per the report, Alexandria was verbally assaulted by Republican Representative Ted Yoho. Also, Yoho has allegedly used sexist words during heated arguments.

However, Mr. Yoho’s office denied the use of the word. On 22nd July 2020, Yoho addresses the matter on the House floor without using her name. In the speech, he apologized for the abrupt manner that he showed in his conversation. Also, he mentioned that he has been married for 45 years old with two daughters and he is extremely conscious of his word.

The following year, she responded to Yoho’s comments stating that she condemned the male privilege and sexist behavior and culture. Besides that, she also criticized Yoho for hiding behind his wife and daughters.