Alexia Nepola is happily married to her third husband, Todd Nepola, who is a businessman.

They got engaged in December 2019 and after two years, they wedded on December 16, 2021, at the Eden Rock hotel in St. Barths. This is the star’s third wedding. She seems to be very happy with her spouse.

Firstly, she was married to Pedro Rosello in 1992.

During their togetherness, they became parents to two sons and named them, Frankie and Peter. Subsequently, they ended their marriage in 1996 and the reason behind their separation has been kept locked up.

Secondly, she got married to Herman Echevarria who passed away in 2016 in a horrific car accident. However, they had already split before the accident. 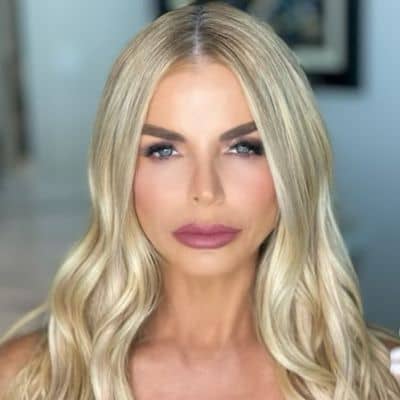 Who is Alexia Echevarria?

Alexia Astrid Nepola is an American reality star, fashionista, and businesswoman. Alexia rose to fame after appearing as a housewife in the ‘The Real Housewives of Miami.

In 2021, she has also made an appearance in the docuseries, ‘Cocaine Cowboys: The Kings of Miami.’ She serves as an editor of the Miami-based publication Venue Magazine.

Alexia Nepola was born in Cuba on May 3, 1967. The reality star has Taurus birth zodiac sign and is of mixed ethnicity. She is also known as Alexia Echevarria through her ex-husband’s surname.

Though she was born in Cuba, later, she was brought up in the United States by her Cuban parents. As of now, she holds an American nationality.

In addition, there is no info disclosing the details of her parents, siblings, and educational life.

In 2006, she joined the Venue Magazine with her husband,  Todd Nepola in Miami. For the Spanish magazine, she works as the executive editor.

Alexia Nepola was interested in the fashion and entertainment field from a young age. She then joined the reality series, ‘The Real Housewives of Miami’ in 2010. Similarly, she was downgraded in the second season of the series so that she could spend enough time taking care of her injured son.

Nepola reprised her appearance in the fourth season of the series in 2021. Peacock released the series on December 26, 2021, which ran its last episode until March 10, 2022. Then, in 2022, Bravo aired its fourth season.

While working on the show, this fashionista has shared the screen with other castes like Lea Black, Adriana de Moura, Marysol Patton, Cristy Rice, Lisa Hochstein, Joanna Krupa, and Karent Sierra, Guerdy Abraira, and others.

The net worth of this reality star is estimated to be around 3 million USD according to the Celebrity Net Worth. Alexia Nepola has not shared her salary and earnings.

The ”The Real Housewives of Miami’ star has not been part of any serious rumors and controversies.

However, she gained good sympathy and attention in the show, where she showcased how she overcome the pain she had after losing her late husband, Herman Echevarria in an accident.

Alexia Nepola is able to maintain a clean profile by balancing her professional as well as personal life.

She has a slim body standing at the height of 5 feet 8 inches weighing around 58 Kg. In addition, the body measurements of Echevarria are 36-26-34 inches which means her bust size is 36 inches, waist size is 26 inches and hips size is 34 inches.

Alexia Nepola has an amazing personality. She has a fair complexion including her blonde hair and hazel eyes.

Talking about her social media presence, Alexia Nepola is available on Instagram and Twitter, which is followed by more than 188K and 75K followers.

There is also an official Facebook page under her name, that has garnered over 206K followers.