Alexis Bellino is an American businesswoman, TV Personality who appeared in The Real Housewives of Orange County. Alexis is engaged to her boyfriend. 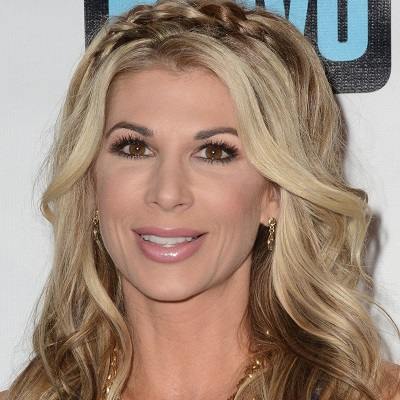 Currently, Alexis Bellino is engaged to her boyfriend, Andy Bohn. The couple officially announced that they are in a relationship on the 3rd of February 2020.

Constantly, the love birds share their picture in her Instagram post. Both of them are passionate about fitness and love to spent time with each other. Bohn also has children from his previous relationship.

Prior to that, Alexis was married to a businessman, Jim Bellino. The former couple was married on the 16th of April 2005.

Together, they share three children a son, James and two daughters, Melania and Mackenna. However, ending the marriage of 14 years, they got a divorce on the 27th of August 2018. As of now, they are good friends.

Before that, she was married to Jeff Barry. The wedding took place in 2002. However, they got separated just after two years of marriage in 2004.

Who is Alexis Bellino?

American Alexis Bellino is a TV and Business Personality. She is renowned for the TV series, The Real Housewives of Orange County and Marriage Boot Camp: Reality Stars.

Last, in 2020, she appeared in the TV series, Below Deck. She also owns the clothing line business, Alexis Couture.

Alexis was born on the 19th of January 1977 in Missouri, United States. Her mother, Penelope is of Italian ethnicity. And her father’s name is unknown.

Till the date, she has not traveled any details of her father. However, in the TV series, Marriage Boot Camp, she disclosed that his parents had a messy divorce. In addition, she had a traumatic childhood.

In 1995, she graduated from Hannibal High School. Later, in 2000, she earned a bachelor’s degree from the University of Missouri with Honors in Marketing.

In 2009, Alexis Bellino started her journey as a TV personality with the series, The Real Housewives of Orange County. Till the 8th season of the series, she appeared in the main cast. The show earned her quite a reputation through the series.

Following the fame of the series, she appeared in other TV series including What’s Up Orange County, Marriage Boot Camp: Reality Stars, and Below Deck.

Apart from the TV appearance, she is active in the business too. She is the owner of the clothing line business, Alexis Couture. Apart from that, she is also the co-owner of the indoor trampoline parks Sky Zone Sports based in Anaheim and San Diego.

Besides that, she is also into fitness and commercials too.

she has an estimated net worth of $1.5 million. Her earnings as an actress are in the range of $19k to $208k. Per season, her earnings as a cast of The Real Housewives of Orange County are $175k.

Last, in 2019, her Instagram post created quite a buzz in the media. In the post, she blasted to her maid for not doing their work properly. For the post many of her followers criticized her.

In response to the criticism of her followers, she posted that her maid is well paid and she will post whatever she wants on her Instagram. Also, she mentioned that she is not looking for their approval.

Alexis Bellino is a brown-eyed blonde. Her height is 5 feet 9 inches and has a decent weight.