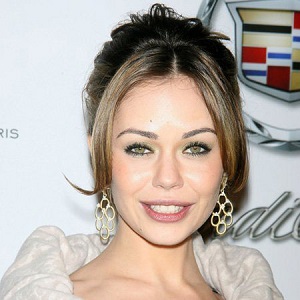 I love college. I know I sound like a dork

I used to dance around the house and taught myself the 'Annie' soundtrack. I got into singing and fell in love with it

I read a lot of autobiographical stories, and I write plays and prose. And I play piano and cello. A lot of my downtime is devoted to that.

Talking about her relationship, she used to date an American actor and musician Michael Pitt but their relation couldn’t last long and eventually broke up.

Dziena and Pitt had met each other at the theater group in Brooklyn, New York. They had started to see each other from 2000 and ended up at 2004.

Currently, Dziena is found to be single. Later on, she started dating Jeffrey Francis Ausley but things didn’t go well. When Ausley tried to end up things with her, she went crazy, screaming, throwing tantrums and threatening to harm Ausley.

After onwards they also broke up and Ausley was granted a restraining order against the actress.

Alexis Dziena is an American actress best known her in a role as Melissa in Strangers with Candy, as Lolita in Broken Flowers, as Heather in Sex and Breakfast, as Ashley Presser in Sister and as Scout Finch in Without Ward. She is also mostly known as Wonder Girl.

Born as Alexis Gabriella Dziena in New York City on 8 July 1984. Her ethnicity is Irish, Italian and Polish and nationality is American.

Since childhood, she was interested in acting and later studied theater at the American Academy of Dramatic Arts in New York where she performed in numerous plays.

She did her schooling at Saint Ann. Dziena has an older brother Alex who is a musician and DJ. She spent most of her summer in a small shore town South Jersey of Sea Isle City.

In high school, she was offered to play a role in the Twelfth Night for which she had also taken acting classes.

At the age of 17, Dziena first got a chance to work in an HBO television series as a jealous girlfriend. She debuted from the television series Witchblade as Bola in 2002 and in a movie ‘Mimic 3: Sentinel’ as Rosy Montrose in 2003.

Alexis Dziena has also done a starring role in a small screen on ABC TV sequence Invasion as Sheriff’s girl Kira Underlay. After then she had started to play a wide range in movies and television series portraying different roles.

She has been called upon to perform a guest role in many series of Law & Order, Law & Order: Special Victims Unit, Joan of Arcadia, etc.

She had even portrayed a sexually active teenager in Lifetime Channel original ‘She’s too young’.

She is active in the industry from 2002 to till now gaining name, fame, and followers. In 2015, she appeared in a movie Without Ward in which she played the role of Scout Finch.

Alexis Dziena hasn’t much of her rumors but she has been through a Scandal where her personal and private photographs were leaked from her mobile phone.