Alexis Knapp is an American actress, singer, and model.  She is best known for her role as Stacie Conard in the film ‘Pitch Perfect’ in 2012, and its sequel, ‘Pitch Perfect 2’, and ‘Pitch Perfect 3’. She is currently single. 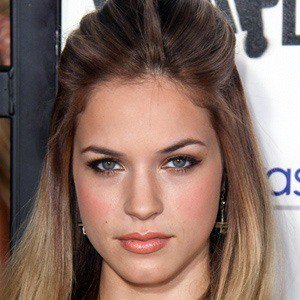 I was not the hot, popular girl in school.

I'm pretty forgiving, so sometimes I forget how evil people were to me. Then I think, 'Wait a minute. Don't let them get you.' Then I hit 'ignore' on Facebook.

There's so much more to me as a human being than just my appearance, and I want to integrate that into my work.

What is the relationship of Alexis Knapp?

Alexis Knapp is currently single. Previously, she dated fellow actor Ryan Phillippe in 2010 but the couple broke up in September of that year.

She found out that she was pregnant by then and welcomed a daughter named Kailani Merizalde Phillippe-Knapp ion July 1, 2011, and her ex-boyfriend, Ryan was also present at that time.

Other information regarding her current relationship and affair are unavailable she likes to keep her profile low.

Who is Alexis Knapp?

She is also well recognized for her performance as Alexis in the party film ‘Project X’ in 2012.

She was born on July 31, 1989, in Avonmore, Pennsylvania, USA. Her birth name is Alexis Merizalde Klapp and she is currently 32 years old. Her father’s name is Bradford Elwood Knapp and her mother’s name is Marjorie. She lost her father when she was 15 years old.

Knapp grew up in the outer banks of North Carolina and moved to Los Angels at the age of 18. She has two brothers: Jose Cuervo Knapp and Zack Knapp.

Knapp’s hobbies include listening to music, dancing, and yoga.

Talking about Alexis’ education history, she obtained classical training in performing arts. Apart from that, she has not provided the names of educational institutes.

Alexis Knapp began her career as a model and also she hosted a popular internet video series ‘project Lore’ in 2008. She appeared as a small role in ‘Percy Jackson & the Olympians: The Lightning Thief’ as Aphrodite Girl #9 and in ‘Couples Retreat’ as a Dance Academy Girl.

She got her first major role as Alexis in ‘Project X’ in 2012 and later appeared as Stacie Conrad in ‘Pitch perfect’. Also, she appeared in the pilot of ABC’s short-lived series ‘Super Fun Night’ and appeared as Taylor Jaffe in ‘So Undercover. Recently, she appeared as Samantha Logan in ‘My Christmas Prince’ in 2017.

Knapp has a slim body with a  height of 5 ft. 8 inches and she weighs 65 kg. Alexis Knapp has green eyes and blonde long hair. Her body measurement is 32-24-34 inches. Knapp’s shoe size is 9(US) and her dress size is (2US). Her skin type is delicate and she has a sensitive skin type.

She has an estimated net worth of around $1 million as of 2022, and she has earned that sum of money from her professional career. However, Alexis’ salary and net worth have not been revealed yet.

There is a rumor that she is dating Seth MacFarlane, who is the creator of the TV series ‘Family Guy’ but neither of them has confirmed about the rumor.