Alexis Ohanian is an American internet entrepreneur and investor.

Alexis Ohanian is a married man. He is married to the famous American tennis player Serena Williams. The couple got married on 16 November 2017.

After years of their affair, the couple got engaged on December 29, 2016. On April 19, 2017, Williams posted a sideways picture of herself on Snapchat focused on her belly. Her pregnancy was revealed by her sister Venus Williams.

The couple was expecting their first child. His wife Serena gave birth to a beautiful baby girl on 1 September 2017. They kept the name of their baby, Alexis Olympia Ohanian Jr.

The couple has been together for a long time and their relationship is still going very well. 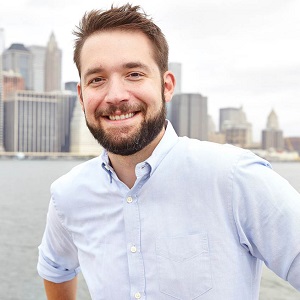 To join in the industrial revolution, you needed to open a factory

in the Internet revolution, you need to open a laptop

It takes discipline not to let social media steal your time.

Who is Alexis Ohanian?

Alexis Ohanian is an American internet entrepreneur and investor. He is best known as the co-founder of the social news website Reddit.

He is currently serving as executive chairman of Reddit. He also co-founded the early-stage venture capital firm Initialized Capital. He was previously a partner at Y Combinator.

Alexis Ohanian was born on April 24, 1983, in Brooklyn, New York City, New York, United States. His nationality is American and he is of Armenian and German ethnicity.

His birth name is Alexis Kerry Ohanian. He is the son of an Armenian-American father Chris Ohanian and a German-born mother, Anke Ohanian. His father came to the US as a refugee.

Alexis Ohanian went to Howard High School in Ellicott City, Maryland, and graduated in 2001. After that, he attended the University of Virginia and graduated with degrees in commerce and history in 2005.

After university graduation, Alexis started reddit.com, with co-founder Steve Huffman. He initially received funding from Y Combinator after Ohanian and Huffman were rejected for their initial idea, My Mobile Menu.

They joined the first batch in the Summer of 2005 and were later acquired by Condé Nast in 2006. Ohanian continued to work closely with Reddit as a member of its Board of Directors.

He returned to Reddit full-time with co-founder Huffman on July 10, 2015, to lead the now-independent company.

Alexis co-founded Initialized Capital in 2010 and made seed investments in startups including Instacart, Zenefits, Open door, and Cruise.

In 2016, he was named one of Fast Company’s “Most Creative People in Business“.

Alexis Ohanian: Salary and Net Worth

Alexis Ohanian has been a successful person in his life and he has accumulated a net worth of 10 million dollars.

He has been a part of several controversies in his life due to his anger and bad behaviors.

Alexis Ohanian has a height of 6 feet 5 inches. His body weighs 96kg.

Also get to know more about the birth facts, education, career, net worth, rumors, height, and social media of different personalities like Alexis Kerry, Eduardo Saverin, and Gary Vaynerchuk.