Alfie Allen is a Game of Thrones(GoT) starrer British actor. His net worth in 2017 was $2 million and now it is $6 million. Alfie is dating a new girl after six months of the birth of his baby with his ex-girlfriend. 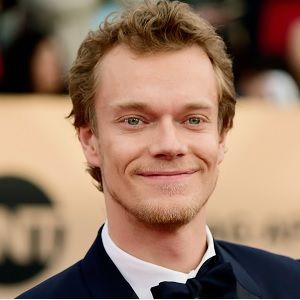 My advice to any teenager would be, don't try too hard - just get on with it. That's what I did. Have fun: enjoy life.

I haven't had a lot of 'Games Of Thrones' groupies. The fans seem to be really nice. They don't seem that invasive.

I have to work hard to be punctual, to not lose my temper, take direction and be told what to do - and most of all listen rather than talk.

I actually love pressure. I loved playing sport at school in front of a crowd

I love being on stage in front of a big audience. I buzz off that.

Alfie Allen is currently in a relationship with Antonia Showering since May 2019. Antonia is a graduate in BA in Fine Art from City & Guilds of London Art School.

Previously, he dated Allie Teilz with whom he has a child, Arrow. They met for the first time in June 2017 and started going out. Alfie and Allie broke up in December 2018.

In 2008, he was engaged to Jaimie Winstone who is an actress. However, they did not get married. They were together from 2007 till 2010 and later again were dating in 2013. But, their reunion was not much than a dating since they separated in 2014 again.

There were some rumors about his relationship with Iona Elizabeth and Sai Bennett.

Who is Alfie Allen?

Alfie Allen is an English actor. He is widely famous for his role as Theon Greyjoy in HBO’s series Game of Thrones.

In addition, he has popular for his role in the movies including, John Wick, Pandemic, and Freefall.

His father is a Welsh actor and his mother is an English film producer. He is of English ancestry.

He has five siblings and one of them is Lily Allen who is a famous singer and actress. Also, he is a third cousin of Sam Smith.

He is not so tech-savvy and says that he does not even know how to send an email.

Alfie Allen started his professional career in 1998. He first appeared on a big screen as Arundel’s son in Elizabeth which was produced by his mother. And in the early part of his career, he appeared in the movies including Atonement, Agent Cody Banks 2, and several others.

He also was a cast in the movies including, Freefall, Soulboy, The Kid, and Confine. However, he became world-famous after landing in the HBO’s series Game of Thrones in 2011. Along with the success of the series, Allen also got a huge amount of fame.  Following this, he has starred in movies like John Wick, Pandemic, and several others.

Recently, he was seen in the two episodes of Football: A Brief History. In addition, he was a cast in the series Close to the Enemy.

According to The Hollywood Reporters, the salary of the Game of Thrones’ stars is about $500,000 per episode. As a result of this, he has earned a wealth of more than $2 million as of 2017.

In 2014, Alfie’s sister Lily posted on Reddit that she was approached first to play the role of Yara in Game of Thrones. However, Alfie later said that she was never approached with the offer.

Alfie was also involved in the controversial rape scene of Game of Thrones where Sansa was the victim. His comment, “It really was a horrible day” was related to the scene in many ways.

In addition, there are no rumors or news about him being gay.

Allen is 5 feet 9 inches tall and weighs 67 Kg. Also, he has red hair and green eyes. Furthermore, his chest, arms, and waist sizes are 37, 24, and 34 inches respectively. In addition, he wears a shoe of size 8.