Alfonso Ribeiro is an American actor, director, dancer, and host. He is married.

Handsome Ribeiro is a married person. After being in the relationship with Angela Unkrich, a writer, they got engaged in July 2012 and married on October 13, 2012.

The couple has two god gifted children named Alfonso Lincoln Ribeiro, Jr. and Anders Reyn Ribeiro. Previously, Ribeiro was married to Robin Stapler in the year 2002, but got divorced in the year 2006 and also has a daughter named Sienna Ribeiro. 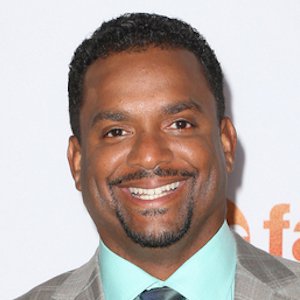 We are all winners here

If you actually relax your vocal cords they actually work better

I enjoy looking at words on paper and visualizing how to make them come to life. As a director, the creative process is really amazing.

Who is Alfonso Ribeiro?

Alfonso Ribeiro is an American actor, director, dancer, and host. He is immensely known for hosting the popular shows including ‘Catch 21’ and ‘Spell-Mageddon’. Ribeiro is a hardworking person and has made recognizable position in American entertainment industry and also able to gain more fame and fans. Currently, he is hosting ABC’s America’s Funniest Home Videos.

Ribeiro was born on September 21, 1971, in New York, U.S.A. His nationality is American and belongs to Afro-Trinidadian ethnicity.

He was born to Michael and Joy Ribeiro. He was raised up with his parents in a friendly and entertaining environment. He was mainly encouraged by his father to secure career in the entertaining field and he was also highly dedicated and interested.

Concerning about his educational background, he attended California State University at Los Angeles and graduated from there.

Ribeiro started his career at the very early age and gained a little recognition after appearing in a lead role in the Broadway musical “The Tap Dance Kid” and able to receive positive reviews. In the year 1984, he appeared in a Pepsi commercial as a dancer boy. Ribeiro was mainly popularized after playing in NBC sitcom “The Fresh Prince of Bel-Air”. He also competed in reality TV show “Celebrity Duets” as a celebrity singer.

He started hosting the game show “Catch 21” on GSN in the year 2008. Ribeiro along with Witney Carson won the competition “Dancing with the Stars” (season 19). Some of his popular T.V movies include “Kidz in the Wood”, “Magnum, P.I.”, “Mighty Pawns” etc. and some of his directed television series include “All of Us”, “Meet the Browns”, “Are We There Yet?” etc.

Alfonso Ribeiro: Salary and Net Worth

He has accumulated a net worth of $7 Million as of 2022. But there is no information regarding his salary.

Once Ribeiro has been a part of a controversy when he said Scott Disick isn’t really a star and he is just a guy who hangs out in the bar. But Scoot didn’t take any action regarding this matter. There are no other drastic rumors regarding Ribeiro personal and professional life.

Alfonso Ribeiro has the height of 5 feet 5 inches. His body weighs 63kg. He has black hair and black eyes.