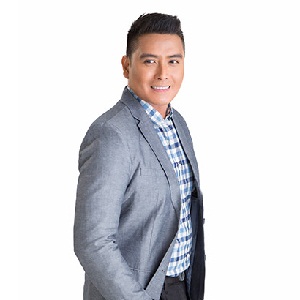 Alfred Vargas is a married man. After being in the relationship with Yasmine Espiritu for several years, they finally got married on 16 Aug 2010.

As a loving couple, they have already welcomed two children named Alexandra and Aryana. Currently, he is staying happily with his wife and children in the Philippines.

Previously, Vargas has been in the relationship with LJ Reyes from 2006 to 2007.

Who is Alfred Vargas?

Alfred Vargas is a Filipino actor plus a model. He is most famous for his role in the film “When I Met U” as ‘Albert’ and T.V shows “Love to Love” as ‘Mike’ and “Mars Ravelo’s Darna” as ‘Gabriel Ramirez’.

He was born to Alfredo Vargas, Jr, and Susana Dumlao Vargas on October 24, 1979, in San Juan, Metro Manila, Philippines. He belongs to Asian ethnicity.

His father’s name is Alfredo Vargas, Jr. and his mother’s Susana Dumlao Vargas.

Talking about his educational background, he attended Ateneo de Manila University and graduated in A.B. Management in Economics.

Later on, he also attended the University of the Philippines Diliman to pursue a master’s degree in public administration.

Alfred Vargas began his acting career as a member of ABS-CBN Star Magic. He made his T.V debut in the year 2002 and appeared in a T.V show titled “Pangako Sa ‘Yo” as ‘Dyno Zuryete’.

Next year, in 2003, he made his film debut and appeared in a film titled “Liberated” as ‘James’. He also appeared in several low-rated films at the initial phase of his career including “Bikini Open”, “Ang Lagusan”  and “Gigil”.

Currently, there are no drastic rumors regarding Vargas’s personal and professional life. It seems like he is doing the best job without harming others for which he hasn’t been a part of desperate controversy yet.

Alfred Vargas has the height and weight is unknown. His hair color is black and eyes are in dark brown color.