Updated On December 6, 2022 | Published By: Robert Taylor
Share this
In Relation 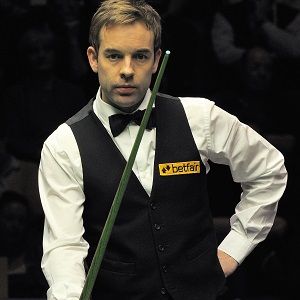 What is the relationship of Ali Carter?

Back in 2009, Ali Carter has a love affair with Sarah. The couple began going out and also have a romantic time together. Furthermore, they have also a son named Max. However, the love birds couldn’t carry their relation too long and split up.

Currently, the snooker ace is in a relationship with Stella English. Initially, the couple started dating in 2016. Moreover, the beautiful couple is blessed with a child named Olivia.

Who is Ali Carter?

Furthermore, he is the two-time World Snooker Championship runner-up. Ali lost twice in 2008 and 2012 in the final to his rival Ronnie O’Sullivan.

In addition, he has also won four ranking titles and ranked second in the world rankings. Ali is famous for his nickname “The Captain”.

Who are the parents of  Ali Carter?

Ali was born on July 25, 1979, in Colchester, Essex, United Kingdom. He belongs to the English ethnicity.

Talking about his early life and parents, there is not much information regarding it.

From his early teens, Ali had a keen interest in snooker. At the age of 17, he started to play professional snooker. There is no information about his education.

Furthermore, Ali has lifted the Welsh Open title in the 2008-09 season by thrashing Joe Swaii in 9-5 sets.

However, he was knocked out by John Higgins in the semi-finals 2010-11 season. In the World Snooker Championship Ali lost twice to Ronnie O’Sullivan in the 2008 and 2012 finals.

Apart from that, Ali couldn’t make it into the final despite being in the semi-final in the season 2009-10 in both China Open and World Championship.

Besides this, Ali has also conquered the Shanghai Masters in the 2010-11 season and the General cup in the 2014-15 season.

As an ace of the snooker, Ali earns a massive amount of money from his professional snooker career.

So far, Ali has won many trophies and honors in his career. At the age of 20, he received the WPBSA Association Young Player of the Year award after winning the Benson and Hedges Championship. Apart from that, Ali has managed to win many trophies in his successful career

Talking about the rumors and controversy, Ali has not been stuck in any controversy.

Moreover, there are not any drastic rumors regarding his personal and professional life. It seems he has more focus on his profession rather than on other stuff.

Moving towards his body measurements, Ali Carter has a height of 5 ft 8 inches and his weight is unknown.