Ali Cobrin is an American actress. She is best known for Look: The Series and American Reunion movie. She is a married woman. 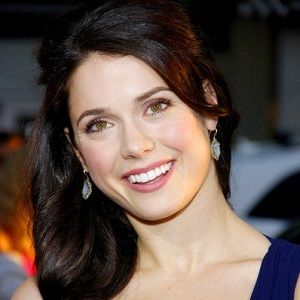 Ali Cobrin is a married woman. She is married to her boyfriend Zak Resnick. Their engagement was held on 23rd July 2017. After a year of their engagement, they exchanged their wedding vows on October 7, 2018.

It seems like they are having a quality time. There is no news of their divorce.

Who is Ali Cobrin?

The American actress Ali Cobrin is famous for her role as Molly in the Showtime series Look: The Series, and as Kara in the 2012 film American Reunion.

She was born on 21st July 1989, in Chicago, Illinois. Similarly, she is the daughter of Peggy Jo (Elmi) and Marvin “Micky” Richard Cobrin.

Likewise, she has a sister, Micky Cobrin, and also has two half-sisters, however, their identity is not revealed.

She holds an American nationality and her ethnicity is Jewish-Italian/Sicilian-English-German.

Talking about her education, she graduated from Chicago Academy for the Arts and majored in musical theater. Similarly, she trained to become a classical ballerina and competed in the Junior Olympics.

She began her entertainment career as an improvisation player in Second City’s teen ensemble. She also danced with the Burklyn Ballet Theater touring Scotland, where she performed at the Edinburgh Fringe Festival.

Similarly, Ali Cobrin had workshopped Broadway musicals, including All That Jazz and Wonderland, which were directed by Ben Vereen and Frank Wildhorn, respectively.

Likewise, she had her first film acting role in a 2008 short film entitled One. The same year, she starred in another short film called Jack Turner and the Reluctant Vampire. The movie won two awards in the Los Angeles Accolade Competition.

In the year 2009, Cobrin had a supporting role in The Hole, a 3D film directed by Joe Dante. Similarly, the film would win the first Premio Persol award for the best 3-D movie at the 2009 Venice Film Festival.

In the year 2010, she made her debut television appearance in Kings by Night, a comedy pilot for Spike TV, and Showtime’s LOOK. Similarly, she had a lead actress role in the film Cold Cabin and appeared opposite to rapper B.o.B in the Adidas Originals shoe campaign commercial, MEGA Diner. In the year 2011, she guest-starred in the television series, Friends with Benefits.

In the year 2012, she had a supporting role in American Reunion, a sequel in the American Pie film series. Likewise, the same year, she starred in Life’s an Itch. In the year 2015, she portrayed Kylie Atkins in Trevor Matthews’ horror-thriller film Girl House, in which she co-starred with Slaine.

Furthermore, she portrayed also Joan in the Drama thriller film Outlaw, which was directed by Todd Shields, and Julia in Michaël Nakache Drama film Connected.

She has not won any awards and nominations yet.

The estimated net worth of this actress is $1 million dollars as of 2019. She might earn a huge amount of money from her career but there is no information about her exact salary.

There is no any rumors and controversy about Ali. She is successful in maintaining her life free from rumor.

Talking about Ali Cobrin’s body measurements, she has a decent height of 5 feet 8 inches and weighs 67 kg. Her hair color is dark brown and she has brown eyes.

You may also like to read Erica Rose (Actress), Billy Magnussen, and Marita Stavrou