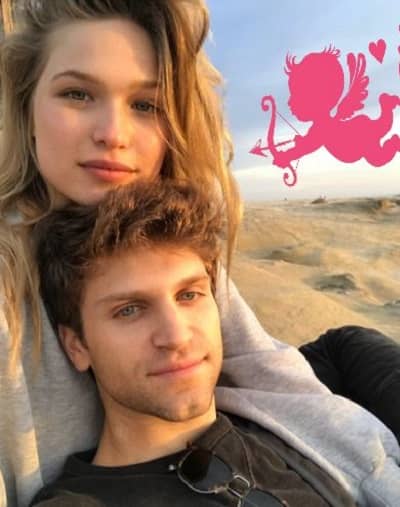 Ali Collier and Keegan Allen who have been dating each other since 2016 are still together and closer than ever. They enjoyed every moment of Covid-19 quarantine together. They were exploring nature together and were seen hiking in the mountains. It seems like the two have plans to start their family.

On 9th December 2020, Keegan posted a picture of him and his lover Ali Collier and wrote,

“Gonna tell my kids this was their father (part 3): self portrait,”

Ali asked him who the father was she or Keegan to which he replied that Ali was the father. Likewise, Ali also flaunts their relationship on her social media. In the year 2015, Ali modeled for Subdued clothing.

Who is Ali Collier?

Ali Collier is an American model and actress who is represented by Vision Modeling Agency. She has modeled for editorial and catalog campaigns of popular women’s clothing brands and magazines.

She was born on 14th March 1995 in Fort Lauderdale, Florida. Similarly, She is 25 years old at present. Ali has featured in the music video Cool For The Summer which is by Demi Lovato.

California-born Keegan Allen is a renowned actor in the entertainment industry. Additionally, he is also a musician and photographer. He is an American national.

Notably, he is famous for his acting in Pretty Little Liars. In the show, he portrayed the character of ‘Toby Cavanaugh’ from 2010 to 2017 in a total of 90 episodes. He is active in this industry since 2002. Read more bio…