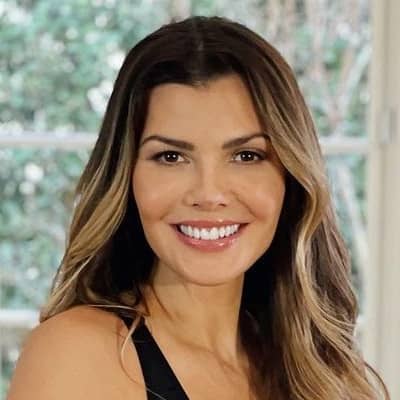 Ali Landry is a married woman. Currently, she is having happy conjugal life with her husband and children. Her husband is Alejandro Gomez Monteverde who is a film director.

The couple married on April 8, 2006, in San Miguel de Allende, Mexico. The couple together has three children one daughter and two sons. Their first child a daughter named Estela Ines Monteverde was born on July 11, 2007.

Similarly, their second child a son name Marcelo Alejandro Monteverde was born on October 8, 2011. Valentin Francesco Monteverde who is their third child or second son was born on July 11, 2013.

Valentin’s middle name was inspired by Pope Francis, the head of the Catholic Church, and sovereign as Landry met him during she was pregnant and he also blessed the baby.

Landry was previously married to Mario Lopez who is an actor and television personality. The pair met at the 1998 Miss Teen USA pageant and started to date each other.

After dating over 5 years the couple eventually engaged during the summer of 2003 and married on April 24, 2004, at the exclusive Las Alamandas resort outside Puerto Vallarta, Mexico.

The couple married in a Roman Catholic ceremony in front of 50 guests. Unfortunately, just after two weeks, the marriage was annulled in May 2004 as Lopez cheated on Landry.

Who is Ali Landry?

Ali Landry is an American actress and model. She rose to prominence after winning the title of Miss USA beauty pageant in 1996.

After that, she won the Miss USA crown while Alicia Machado was crowned Miss Universe USA in 1996. Besides, she is best known for appearing on the UPN sitcom Eve.

Ali was born on July 21, 1973, as Ali Germaine Landry. Her mother named her after she watched actress Ali MacGraw’s 1970 film, ‘Love Story’. She hails from Cecilia, Louisiana, U.S.

Landry holds an American nationality and belongs of French (Cajun) descent. She is the daughter of Gene Allen Landry and Renella “Ray” Landry. She has two siblings named Gene Landry and Ty Landry.

Moving towards her academics, she studied at Cecilia High School and graduated in the year 1991. She was captain of the cheerleaders in high school.

For further studies, she attended the University of Southwestern Louisiana major in mass communication. She is also a member of the Kappa Delta sorority.

In 1990, Ali participated in the Miss Louisiana Teen USA beauty pageant where she won the title of the pageant. Afterward, she represented Louisiana in the 1990 Miss Teen USA pageant held in Biloxi, Mississippi in July 1990.

She placed first in the preliminary swimsuit and evening gown competitions in the pageant but was ranked seventh during the final competition. In 1996, Landry won the Miss Louisiana USA title and become the first former Miss Louisiana Teen USA to win the Miss crown.

Similarly, she competes in the 1996 Miss USA pageant and eventually won the title which was held in South Padre Island, Texas. She then participated in the Miss Universe pageant and made it to the top six before being eliminated.

Landry was the only former Miss Teen USA delegate to competing at all three pageants until 2000 when Miss USA 2000, Lynnette Cole competed. She modeled for various photographers and magazines in her career such as FHM Magazine, People magazine, and more.

In 1997, Landry stepped into the acting field through the television series, Clueless in an episode of Sharing Cher through a minor role. That year, she also appeared in the other two series Sunset Beach (as Kenzie) and Conan the Adventurer (as Raina).

Furthermore, she starred in the 2011 TV Guide Network’s show Hollywood Moms’ Clun and as well as the executive producers of the show. She hosted Yahoo!’s interview show, Spotlight to Nightlight in the versions of the English and Spanish language.

To date, Landry has not faced any sorts of rumors and disputes that create headlines in the media. Also, she stays miles away from such controversial acts that could hamper her personal and professional life.

As of 2021, Landry has an estimated net worth of around $6 million throughout her successful profession as an actress. Besides, her salary, yearly income, and other assets are still under review.

The actress has an impressive body figure with a fair complexion. She stands at the height of 5 feet 8 inches tall and her weight is around 54 kg. Likely, she has a beautiful brown pair of eyes color with short brown hair.

Likely, she is active on Twitter with nearly 53.8k followers. She has a Facebook page with over 48k followers.