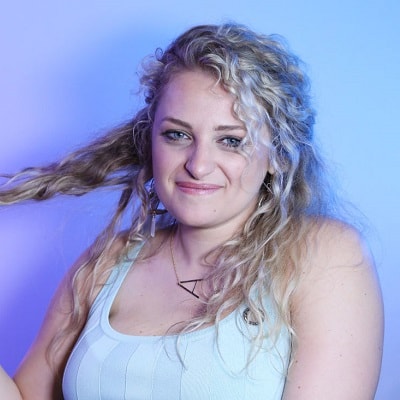 What is the relationship of Ali Stroker?

Ali Stroker is currently in a relationship. Stroker has identified as bisexual. She is currently dating her boyfriend David Perlow. But, they have not revealed their future plans.

Ali stroker made a big announcement about her being a mother. She shared her romance with her long-term boyfriend David Perlow.

Previously, she dated fellow ‘The Glee Project’ contestant, Dani Shay in 2012 but she and her girlfriend soon broke up.

Who is Ali Stroker?

Ali Stroker is an American singer and actress who was a finalist in season 2 of ‘The Glee Project’ and has starred in ‘Glee’, ‘Spring Awakening’, ‘Oklahoma!’.

She was born on June 16, 1987, in Ridgewood, New Jersey, USA. Ali was born as Alyson Mackenzie Stroker and she is currently 35 years old. She was born to father Jim Stroker and mother Jody Schleicher. She has two siblings- older brother Jake and younger sister Tory.

When she was two years old, she had a car accident which resulted in spinal cord injury and left her paralyzed from the chest down.

Ali holds American citizenship but her ethnicity is a mixture of English, Irish, German, Swiss-German, Scottish. Furthermore, she knows how to sing in Mezzo-Soprano.

She attended the Ridgewood High School and the starred in school musicals and was a senior class president in her high school. After that, she attended the New York University Tisch Drama Department and graduated in 2009 with a degree in Fine Arts.

She went on to perform at  Kennedy Center,  Lincoln Center, and also in the production of The 25th Annual Putnam County Spelling Bee.

After that, she began her professional career in 2011 and a minor role in a short film ‘I Was a Mermaid’ and ‘Now I’m a Pop Star’. She made her breakthrough in 2012 where she starred in reality TV series ‘The Glee Project’ as she reached the finals but was unable to win.

Apart from acting, she holds the national record in wheelchair racing and also sings in Mezzo-Soprano.

In addition, she became the first disabled person to win the Tony Award.

She must have accumulated a huge sum of money from her career however, she has not revealed her exact salary and income. As of 2022, she has an estimated net worth of $1 million.

Ali has been successful in keeping herself far from rumors and controversies in her personal and professional life.

Ali has blue eyes and blonde hair. But, other information regarding her shoe size, dress size, height, weight, body measurement, etc. is not available.