Updated On January 29, 2023 | Published By: MarriedBioraphy
Share this
Single 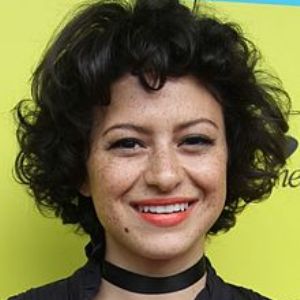 I think for a girl to be strong, it doesn't have to involve being physically strong.

I guess I've always been drawn to roles that have smart characters commenting on what's happening around them.

But I love singing, and I've been singing backup for friends' bands.

What is the relationship of Alia Shawkat?

In 2003. Alia was in a relationship with Michael Cera, a Canadian actor, in the ‘Arrested Development’ which did not last long.

This was followed by dating Jack Antonoff for one year from 2009-2010.

After dating Jack Antonoff, she was spotted with Michael Angarano in 2010 getting cozy at a Los Angeles club which was confirmed by Alia later.

This relationship also did not last long. In May 2017, Alia Shawkat has come out as bisexual.

Who is Alia Shawkat?

Alia Shawkat is an actress best known for her role as Maeby Funke in the Fox Television series ‘Arrested Development.

In this series, she belongs to a mischievous part of an Orange County family trying to adjust to their loss of wealth. She is also recognized for her role as Gertie Michaels in the horror-comedy film ‘The Final Girls’.

Alia Shawkat was born to Dina and Tony Shawkat in Riverside, California, United States of America, and was brought up in nearby Palm Springs.

As her mother was Irish-Norwegian and her father was a Kurdish, she belongs to a family of mixed(Iraqi, Norwegian, Irish, and Sicilian/Italian) ethnicity.

Talking about her other family members, she has two brothers and Paul Burke (actor) is her maternal grandfather.

Because her father and grandfather both are actors, she initiated her career from a very early age of life (at 11) in the ABC Family series State of Grace’.

It is found that during her free time, she used to go to study at Rancho Mirage School where she studied Math, English, Physics, Geography, and Drama. Her target is to study International Relations at Yale University.

Just after two years of acting in ‘State of Grace’, she starred in the Fox Television Emmy Award-winning series ‘Arrested Development’ for all the shows from 2003-to 2006 and 2013-present.

This was the track that guided her to be o successful actress. Later, she also played opposite George Clooney in ‘Three Kings’ which was followed by ‘The Trial of Old Drum’ as a supporting role and many others like Jag (1995), Without a Trace (2002), Boomtown (2002), Presidio Med (2002) and Rebound (2005).

In 2015, she also appeared as a guest star on Broad City playing the role of Ilana Glazer, and got beautiful reviews of being similar to Glazer.

Currently, she is working on November 21, 2016, and premiered the TBS comedy ‘Search Party’.

She with her bold and Pragmatic acting talents has become an active and demanded actress with a worth net of $ 4 million.

She also won the TV land Award in 2004 for Future Classic and Young Artist Award for the best supporting role in 2005.

Due to the relationship status of Alia Shawkat (single) for a long period, she was rumored to be gay.

In early 2010, she was rumored to be dating Michael Angarano. In May 2017, Alia Shawkat has come out as bisexual.

Alia Shawkat has a social media presence. There are 40.4k people following her on her Twitter.

Brad Pitt Has A New Lady Love In His Life? Does Angeline Jolie Approve Of The Actor’s New Beau Of?

Is Brad Pitt dating again? Know the actor’s answer to this perennial question!