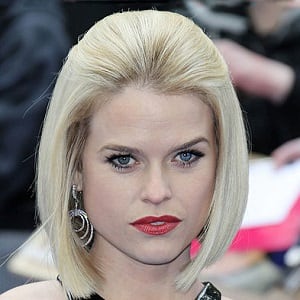 [on playing Edgar Allan Poe's lover in The Raven (2012)] I did literature at university, so I had a real relationship with poetry, but they don't make many films about the life of a poet. When I read the script, I thought, This is just amazing - because it wasn't indulgent. It allowed itself to have a thrilling aspect.

[on cultural differences between the United States and United Kingdom] You know, we're divided by a common language, even though we're meant to have been from the same place. There is a definite shift when I get on the plane and I land. It's very Puritan in America, and it's a different culture in England and much more European in its belief system. In the United States, it's quite strict.

I'm a girl's girl. I love to hang out with boys - I've got brothers - but I'm a girl's girl, in all the ways you can be girlie. Nails and chats and gossip magazines and reality television and popular culture... Did going to Oxford and reading "Paradise Lost" change that? No.

Alice Eve previously dated British actor, Rafe Spall. They were together from 2004 to 2006. Additionally, Alice has also been in relationships with actor Rufus Sewell, singer Ben Adams, and British poet Adam O’Riordan. She met O’Riordan while reading English at Oxford.

From 31 December 2014 to 2017, Alice was married to Alex Cowper-Smith. Alice was her high school sweetheart. Currently, Eve is believed to be dating a man whose details are not known.

Who is Alice Eve?

Alice Eve is a British actress. People mostly know her for her role as Dr. Carol Marcus in ‘Star Trek Into Darkness.’ Additionally, she has appeared in several other movies and television series to date including ‘Iron Fist’, ‘Bees Make Honey’, ‘Dirty Weekend’, ‘Cold Comes the Night’, and ‘Men in Black 3’ among others.

Eve was born in London on February 6, 1982. She was born to parents Trevor Eve and Sharon Maughan. Both of her parents are actors. Additionally, she has two brothers, Jack and George. Since both of her parents are actors, it comes as no surprise to anyone that Alice was exposed to the world of show business from an early age. She is of British and American nationality. Furthermore, she belongs to the mixed ethnic background of Irish, Welsh, and English.

Talking about her education, Eve attended Bedales School. In addition, she took her A-levels at Westminster School in London. Furthermore, she later studied at the Beverly Hills Playhouse and then read English at St Catherine’s College, Oxford.

Eve initially appeared in student productions of ‘The Importance of Being Earnest, Animal Crackers’ and ‘Scenes from an Execution.’ In 2004, she had a minor role as Martha Guthrie in the TV movie ‘Hawking.’ Additionally, Alice also portrayed the role of Cicely Boyd in the TV mini-series ‘The Rotters’ Club.’ In 2006, she had roles in ‘Starter for 10’, ‘Big Nothing’, and ‘Losing Gemma. Since then, she has appeared in several other movies and television series. All in all, she has over 40 credits as an actress.

Some other movies and television series that Eve has appeared in include ‘Pelleas’, ‘Replicas’, ‘The Con Is On’, ‘Untogether’, ‘Ordeal by Innocence’, ‘Hannah Royce’s Questionable Choices’, ‘The Stolen’, ‘Please Stand By’, ‘Bees Make Honey’, ‘Black Mirror’, ‘Criminal’, ‘Misconduct’, ‘Before We Go’, ‘Some Velvet Morning’, ‘Decoding Annie Parker’, ‘The Raven’, ‘ATM’, ‘Entourage’, ‘Sex and the City 2’, and ‘Crossing Over’ among others.

Eve has not revealed her current salary. However, she has an estimated net worth of around $6 million at present.

Eve sparked controversy in 2015 after she commented Bruce Jenner is “playing” at being a woman. This comment was later criticized by many. Furthermore, at present, there are no rumors concerning her life and career.