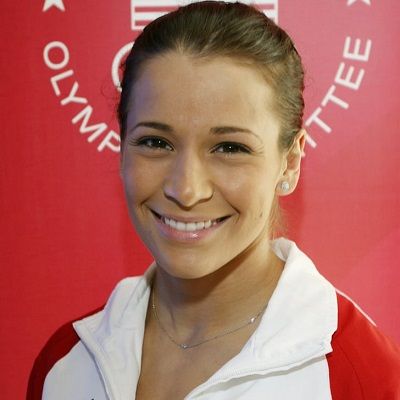 They engaged in August 2013 and their wedding was held on 8th March 2014. Brady is her boyfriend of 7 years. Their marriage was an intimate ceremony held at the Biltmore Hotel in Coral Gables, Florida.

Recently, she shared the picture of her newly born baby on Instagram.

Alicia Sacramone is a retired American gymnast who won a silver medal with the United States team at the 2008 Summer Olympics.

She has worked as an actress in Full Out, Beijing 2008: Games of the XXIX Olympiad and Fashion News Live.

Alicia shared her thoughts that she felt bad for her fellow athletes. Because of the global coronavirus outbreak threatened the cancel of the Summer Olympic Games in Tokyo.

Alicia Marie Sacramone was born on 3rd December 1987 in Boston, Massachusetts, US. She is the daughter of Fred Sacramone and Gail Sacramone. Her father is an orthodontist and mother is a hairstylist and salon owner.

She belongs to Italian ethnicity. Similarly, he has an elder brother Jonathan. From the age of 8, she participated in gymnastics. She started dancing from the age of five.

In the year 2006, Alicia graduated from Winchester High School in Winchester, Massachusetts.

She started training with Mihai and Silvia Brestyan at a Gymnastics club. Brestyans served as her coach for the rest of the life.

During the 2003 National Championships, she was placed 14th in the all-around and she won a bronze medal on floor exercise. In the same year, she participated in her first international competition as a senior.

Similarly, in 2004, Alicia helped the US to win a team gold medal at the Pacific Alliance Championships in Honululu. In the 2004 US Nationals, she finished in 19th place.

In the 2005 National Championships, she won the individual titles on the floor. She was placed third on the balance beam and fourth in the all-around.

Likewise, in February 2009, she confirmed her retirement during an interview at a Boston Bruins game. On 6th August 2009, she announced her return in the elite competition.

After that in the 2010 World Championships, she won a gold medal on the vault and a silver medal in the team competition. She signed a deal with Under Armor in 2011. It was a deal to supply her with competitive apparel for domestic competitions.

Sacramone signed as CoverGirl spokesmodels as the first female athlete. She is a member of Team 24 Fitness and serves as a spokeswoman for the fitness company.

Similarly, she talked about her body and appeared nude in ESPN’s 2011 Body Issue.

According to Celebrity Net Worth, the estimated net worth of Alicia is $8 million. The average salary of an American gymnast is $30,000.

Her husband Brady has an estimated net worth of $10 million. They have a house in Avon Lake, Ohio.

Back in 2008, Alicia fell off the beam and later tumbled on her back during the floor exercise at the team event. It ruined the chance for Americans to defeat China.

Other than that, she has not been part of any rumor and controversy.

Sacramone has light brown hair and brown eyes. She is 5 feet 1 inch tall and weighs around 53 kg.