Actress Alicia Vikander is married and a mother of one.

Alicia Vikander is a married woman. She is married to an actor Michael Fassbender. They tied the knot on October 14, 2017. They have a baby born in 2021. however, the gender, name, etc. of their child is kept low-profile by the new parents.

The couple began dating each other in late 2014. The couple has been together for over two years and their relationship is going very well. 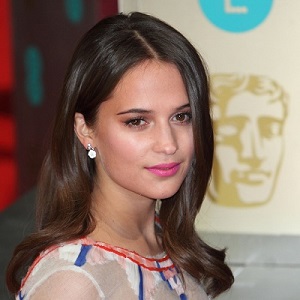 I love to see how far you're able to go, both in skills but also emotionally how far I can push myself

I love when I am outside my comfort zone

In any relationship, when you go through any big change, you struggle to find your new constellation, your new ground. It takes a while to determine what the new relationship between you is.

Who is Alicia Vikander?

Alicia Vikander is a Swedish actress and former dancer.

She won an Academy Award for Best Supporting Actress for her role as Gerda Wegener in the 2015 film The Danish Girl.

She also starred in the Danish film A Royal Affair and the science fiction thriller Ex Machina. Vikander is cast as Lara Croft in the 2018 film Tomb Raider.

She is the daughter of Maria Fahl Vikander, a stage actor, and Svante Vikander, a psychiatrist. Her parents are from small villages to the north and south of Sweden.

Her parents separated when Vikander was two months old and she was mostly raised by her single mother. She has five half-siblings on her father’s side. She trained as a ballet dancer at the Royal Swedish Ballet School since she was nine.

Alicia also trained at the School of American Ballet in New York. Her dance career was sidelined by injuries in her late teens. Her nationality is Swedish and she is of Swedish, Baltic German, and Finnish ethnicity.

Alicia began acting as a child in minor stage productions at The Göteborg Opera. She began her professional acting career by appearing in Swedish short films and television series. She first gained recognition in Northern Europe for her role as Josefin Björn-Tegebrandt in the TV drama Andra Avenyn (2008–10).

Vikander was named as one of the 10 Actors to Watch: Breakthrough Performances of 2012 at the 20th Hamptons International Film Festival.  She was nominated for BAFTA Rising Star Award in 2013. She also received the Editor’s Choice Award at the 2013 Elle Style Awards.

Alicia became financially independent since she was 16. Currently, her net worth is $8 Million according to the sources.

Rumors were that Alicia was in a relationship with Swedish actor Alexander Skarsgård in 2014. Currently, there are no desperate rumors regarding her personal and professional life. It seems she is doing her best job without harming others and has been a straight person in her life, for which she has not been in any controversy yet.