Alicia Villarreal is a singer who are well known for albums like Orgullo De Mujer.

Alicia Villarreal is currently married to Cruz Martínez. Cruz is an owner and producer of the international bands Kumbia Kings and Los Super Reyes.

The couple married on August 31, 2003. They welcome their first child son Cruz Angelo Martinez on December 19, 2005, and another son Felix Estefano Martinez on February 12, 2007.

Previously, she first exchanged vows with a record producer Ezequiel Cuevas in 1991. Though the couple divorced in 1993.

Likely, Alicia was also married to Arturo Carmona. The couple married in 1998 and also had a daughter, Melanie Carmona Villarreal, on April 10, 1999. They divorced in 2001. 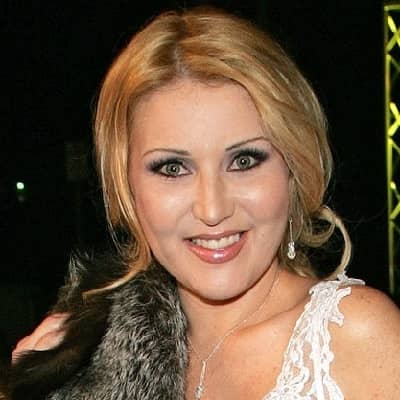 My first album was all rock.

Grupo Limite is always going to be a major highlight of my life.

I know someone young whose husband left her for another woman.

Through music, I think we can inspire each other.

Who is Alicia Villarreal?

Alicia Villarreal is one of the best Mexican singers who are well known for albums like Orgullo De Mujer.

She was a member of the band Grupo Limite, who won Best New Artist at the 9th Lo Nuestro Awards.

Alicia was born on August 31, 1971, in Monterrey, Nuevo León, Mexico. She is the daughter of Víctor Villarreal (father) and  Martha Esparza (mother).

On October 10, 2009, her brother José Víctor Villarreal Esparza was killed in a car accident in Monterrey, Nuevo León, Mexico.

Alicia holds a Mexican nationality and is of Spanish ethnicity.

Talking about her educational background, she hasn’t shared any information regarding it.

Alicia Villarreal has her first performance in the song Mundo De Juguetes at Pipo, a national TV show. And her first professional performance was at a church fund-raiser.

In the year 1995, she formed Grupo Límite and started touring with the more famous Grupo Bronco. They released “Acariciame“, “Te Aprovechas” and “Solo Contigo“.

In the year of 2003, Alicia then started her solo career by releasing Soy Lo Prohibido. It launched the single Te Quedo Grande La Yegua.

After a year, she released her second solo album, Cuando el Corazón de Cruza. The album was produced by her current husband, Cruz Martínez, and was able to win various awards. Further, they work together and wrote several songs.

Alicia performed for the highly televised Selena Vive also. Later she released Punalada Trapera and Ya No Hay Amor on a dual disc of the album Cuando El Corazón Se Cruza which was launched on Mexico in the year 2005.

In 2006, she released her third solo album titled Orgullo De Mujer with the lead single Insensible a Ti. It also garnered a Grammy nomination for Best Mexican/Mexican-American Album.

She released her 4th solo album, La Jefa on June 23, 2009, with “Caso Perdido,” as the lead single. The album debuted at number four on its Latin Albums chart and one number on Billboard‘s Regional Mexican Albums.

Being one of the successful personalities, her net worth is around $12 million.

She has released five albums that have received good commercial success. And so she must have good earning through it.

The singer has not been part of any notable controversies in her career. Furthermore, she is also away from any desperate rumors.

Furthermore, she has her own YouTube channel with over 210K subscribers.

Also, get to know about other musicians like Steve Hewitt, Paul DiGiovanni, Dan Finnerty, and Yungblud.

How old is Alicia Villarreal the singer?