Alika DeRego is an American volleyball player. He is possibly single.

Alika DeRego has managed to keep his personal information secret. According to the records, he is perhaps single. 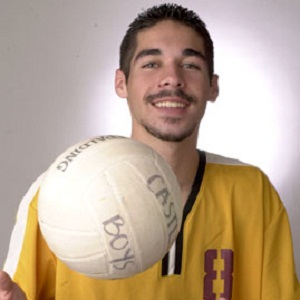 Alika DeRego is an American volleyball player. He is mainly known for the 2011 USA Volleyball Open National Championship where he along with his team won a gold medal.

Alika was born as Alika Joseph Kaleiali’i DeRego on September 7, 1986, in Kaneohe, Hawaii, the United States.

His ethnicity is of Caucasian and has dual nationality of Portuguese-Hawaiian.

The names of his father, mother, and siblings are not disclosed.

About Alika’s educational background, he has a bachelor’s degree in psychology from California State University. Prior to this, he was at James B. Castle High School.

He has also enrolled in Orange Coast College and was graduated in Liberal Arts.

Alika DeRego started playing volleyball professionally from 2002 and played for four years at James B. Castle High School.  He leads his team to the Oahu Interscholastic Association and there he was selected as a player of the year.

He participated in USA Volleyball Boys Junior U18 National Championships thrice in 2003, 2004 and 2005. He also played for Kaneohe Volleyball Club for five years.

Currently, he has played for Kailua Volleyball Club from 2015 till 2016.

Currently, there are no drastic rumors regarding Alika’s personal and professional life. Also, he hasn’t been a part of desperate controversy yet in his career yet.

This amazing player has an estimated net worth of $500 thousand as of 2022.

Regarding Alika DeRego’s body features, he has blue eyes and light black hair.