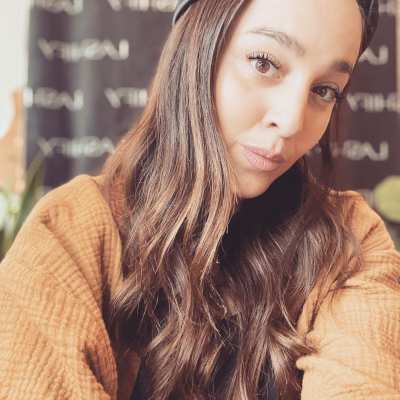 What is the relationship of Alisan Porter?

Presently, Alisan Porter is in a love relationship with Justin de Vera. Justin is a well-named dancer. The couple lives happily along with their two children from Alisan’s previous marriage.

Moreover, Porter is expecting her third child revealing it is a baby girl. She posted the photos along with her family holding a sonogram on Instagram. It is her first child with De Vera. The couple is expected to welcome the new member on 1 November 2021.

Previously, she was in a married relationship with Brian Autentrieth. Brian is a fruit exporter as well as a past child soap opera actor based in California. The couple tied the knot on 10 March 2012.

Their wedding took place on a California ranch in the Santa Monica mountains with nearly 100 guests. Earlier, they were friends for 13 years.

Having said this, the couple separated on 18 December 2017. Alisan announced on Twitter their separation mentioning their divorce in March. Further, she mentioned that they remained friends in the future days.

Know about Alisan’s pregnancy with her boyfriend, Justin de Vera.

Who is Alisan Porter?

Alisan Porter was born on 20 June 1981. At present, her age is 40 years old. Likewise, her birthplace is Worcester, Massachusetts, USA.

Alisan is the daughter of her father, Ric Porter whereas her mother is Laura Klein. Professionally, her father was the co-founder, lead singer, and songwriter of the Worcester-based band Zonkaraz.

Also, her mother is a dance teacher. Due to this, Porter was passionate about performing arts. She has not disclosed her sibling’s details.

Talking about her nationality, Porter holds an American identity whereas her ethnicity is Caucasian. Also, she follows the Jewish religion.

The multi-talent artist was fascinated as her mother was a dance tutor. She joined different dance competitions in her early childhood.

During her high school days, Alisan was part of the theater group named ‘Staples Players. Moreover, she also portrayed the lead role in plays like ‘Cinderella’ and ‘West Side Story ‘.

Porter studied acting at Staples High School in Westport, Connecticut. By the time, she was out of high school, Porter shifted her interest from films to stage and Broadway production.

Professionally, Alisan was interested in dance from her early childhood. Porter made an acting debut in the year 1986 with Star Search. Following her debut, she played in the small role of ‘Li’ll Punkin’ in the children’s TV program ‘Pee-Wee’s Playhouse’. Moreover, she emerged in another small role in the miniseries ‘I’ll Take Manhattan.

Alisan was featured in the first leading role of her career in the movie, ‘Curly Sue’. The movie hit the box office. Also, it became her ultimate feature-film appearance. Likewise, she emerged as ‘Melissa’ in a single episode of the series named The Golden Girls. In 2001, Porter comeback with the TV series ‘Undressed’ portraying the role of Belinda.

Having said this, she failed to be a successful actress. The reason behind this was that Alisan focused on her stage and music career. She formed the band named The Raz in 2003. There, she was the lead vocalist and songwriter.

Freshly, Porter emerged as a contestant on the talent hunt show  The Voice. Her main coach was a renowned singer Christian Aguilera. She won The Voice performing an original song named Down that Road.

Well-named actress and singer, Alisan Porter has earned decent money from her profession. She has been actively present from 1987 till now as an actress, singer, and songwriter.

It is reported that Alisan Porter has an estimated net worth of $500 thousand as of 2022.

However, the multi-faceted talent has not disclosed her exact salary, earnings, and assets details till now.

Being an artist, Alisan was the victim of alcoholism and drug addiction. She mentioned she has been clear-headed since 28 October 2007.

Other than that, Porter had never been involved in any kind of rumors or controversial matters.

Actress Alisan Porter has gorgeous looks as well as a charming personality.

She stands at a height of 5 feet 1/2inches. Also, she has a balanced body weight of 48 kg.

Furthermore, Porter has brown eyes whereas her hair is brown. Her body measurement is 32-26-32 inches (chest-waist-hip) respectively.

About her social media presence, Alisan Porter is an active personality on social media. Alisan has more than 89k followers on her official Instagram account @iam_alisanporter.

She is also active on Twitter with around 46.8k followers.

Moreover, Porter is also available on Facebook with nearly 104k fans and supporters.