Posted by MarriedBiography Last Modified May 2, 2021 | In Child , Divorce , Pregnant
Share this 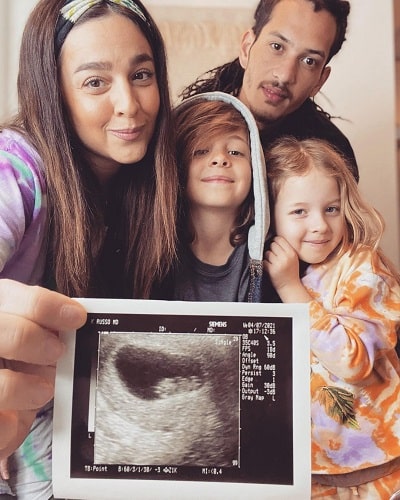 On 24th April 2021, Alisan Porter announced that she is pregnant with her third child who happens to be her first child with boyfriend Justin de Vera. She already has a son Maison Blaise and Aria Sage with ex-husband Brian Autenrieth. She announced the pregnancy on Instagram with a family photo holding ultrasound of the upcoming baby.

“We always knew you would join us. We dreamt of you. Also, we talked about you. We felt you just outside the realm of reality. But, now you’re here. We are all so excited in our own way. For me, I wasn’t sure I would ever experience this again. Motherhood is the most sacred role of my life and I feel so incredibly grateful to do this once again.”

Alisan revealed that for her kids having another sibling is a huge change but they always wanted one. They have named the upcoming child Beeshy whose due date is in early November.

Alisan Porter and Brian Autenrieth were friends for 13 years before they decided forever. They started dating each other when she was 18 years old but they ended their relationship soon after. Eventually, they got back together and have been with each other since then.

They walked down the aisle on 10th March 2012 at the Diablo Dormido – a Californian ranch located in the Santa Monica Mountains. For her big day, Alisan wore a beautiful R-Mine vintage lace dress. They invited around 100 friends and family to join them in their wedding ceremony.

But their marriage fell apart after five years of wedding and announced their separation in 2017. Porter wrote on Twitter,

“In a sad and honest note Brian and I ended our relationship in March. We remain close friends and are committed to always doing our best for our amazing kids. Thank you for the support and have a beautiful holiday. Xo A.”

How much is the net worth of Alisan Porter?

Alisan Porter has an estimated net worth of $500 thousand. She has worked in films like Homesick, Parenthood, Stella, I Love You to Death, Curly Sue, Shrink Rap, The Ten Commandments: The Musical, Meet Dave, and Every Little Step. Her television work includes Pee-wee’s Playhouse, I’ll Take Manhattan, Family Ties, Chicken Soup, Perfect Strangers, When You Remember Me, The Golden Girls, Undressed, and The Voice.

Who is Karlie Redd Dating? Know More About Her Previous Relationship And Engagement!
Tags : Actress The Voice