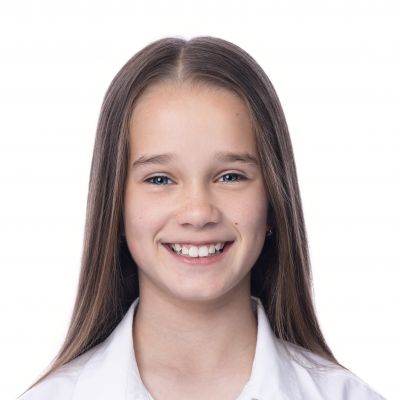 Alisha Weir is a child actress, who is currently single and is not involved in any romantic relationships.

Currently, she is busy with her growing career and study.

Who is Alisha Weir?

Alisha Weir is a rising Irish child actress and Tv star, who is known for her appearance in multiple movies and Tv shows.

Alisha was born on 26 September 2009, in Dublin, Ireland. As of 2022, she is 13 years old and holds Irish nationality. According to the astrologers, his birth sign is Libra and belongs to the Caucasian ethnicity.

She has not disclosed the info about her parents as well as siblings as of 2022. The info regarding her family members is still under review.

As per her academics, she might be studying in a high school but the name of the institution where she is pursuing her education is not known.

Alisha started her mainstream acting career in 2018 as Siobhan Callahan in a horror, mystery, and thriller movie titled “Don’t Leave Home” created by Michael Tully and Francis Uzoma. She got good appreciation from the audience for her appearance in the movie.

In 2010, she appeared in a minor role in the short film, Two: Overboard!

In the year 2018, she was cast in the short film, Day Out. Making her small screen debut, in 2019, she executed the role of Laura in the crime-drama series, Darklands.

Talking about her recent project, she has appeared as the lead cast, Matilda Wormwood, in the musical fantasy comedy film, Matilda the Musical. Matthew Warchus directed it while Denis Kelly is the screenplay writer.

It is based on Roald Dahl’s 1988 novel, Matilda. She has shared the screen with other stars like Stephen Graham, Andrea Riseborough, Emma Thompson, and Lashana Lynch.

On 5 October 2022, it world premiered at the BFI London Film Festival and is set to release by Sony Pictures Releasing, via its TriStar Pictures banner, in the United Kingdom.

Meanwhile, it is scheduled to be released in the United States on 9 December 2022, before paying on Netlflix on Christmas Day 2022.

As of 2022, the net worth of Alisha Weir is calculated to be between 1-2m USD. She primarily makes money by acting in movies, and tv-series.

Her exact salary is yet to be revealed.

The lead cast of Matilda the Musical (film), is keeping herself away from unnecessary rumors or controversies.

She has maintained a healthy distance between her professional and personal life.

The young actress Alisha, stands at the height of 4 feet 6 inches, while her weight is unknown. In addition, she has a fair complexion, along with a pair of blue eyes and light brown hair.