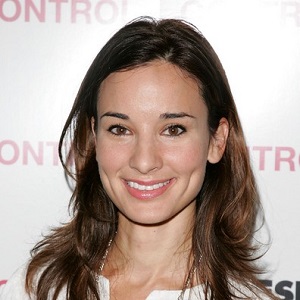 Alison Becker is a married woman. She is married to a guy named, Cameron Salco. There is no information on when and how they wedded, also their dating details are unknown. They do not have any children yet.

However, the couple is living happily with her husband.

Who is Alison Becker?

Alison Becker is an American actress, comedian, television personality and television writer. She is best known as the previous host of VH1’s Top 20 Video Countdown. She is also a former co-host of the FuelTV panel talk-show The Daily Habit.

Becker was born on 8 March 1977, in Allamuchy, New Jersey, USA. Her birth name is Alison Helene Becker. There is no any information about her parents.

She has not revealed any information about her childhood life. She usually doesn’t talk about her private life in media and public. Alison prefers people focusing on her work rather than her personal life. Her nationality is American and she is of Native American ethnicity.

Alison attended Georgetown University in Washington, D.C and graduated with a degree in English in 1999. After college graduation, she moved to New York City and began exploring the fields of theater and comedy

Becker began her career in the early 2000s. After graduating from Georgetown University, she focused on sketch comedy. During her early career days, she created a variety of original characters and sketch comedies.

Becker is a regular player at the Upright Citizens Brigade improv theater. She has also performed for Hopscotch: A New York Sex Comedy and other comedy clubs. Becker also worked as a VJ on the music video TV channel Fuse, where she hosted F-List and some other shows.

She was also the host of VH1’s Top 20 Video Countdown. Alison was a co-host on the FuelTV talk show The Daily Habit and had a recurring role on NBC’s Parks and Recreation. She is currently on the online show Mayne Street with ESPN broadcaster Kenny Mayne on ESPN. She recently appeared in an episode of Lucifer in 2017. Her net worth is unknown.

She has a height of 5 feet 4 inches. Her hair color is dark brown and her eye color is brown.

Alison Becker is giving clues if she is having dating affair or not?