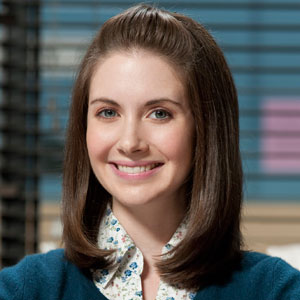 A wedding, people decide to get married, it comes out of such love for one another and then women can turn into these other people. They're planning something that's the biggest event they'll ever plan in their lives and it turns them into this other person, so it's not totally the guy's fault that he's feeling disconnected from this person

I always wanted to play a mental patient. I was fascinated with playing crazy people in college, and I don't know if I ever quite perfected it.

Alison Brie has kept her personal life low profiled. She doesn’t talk much about her personal life in the media and public. She was in a romantic relationship with Dave Franco, an actor since a long period of time. They began dating each other back in 2012. After three years of their love affair, the couple got engaged in August 2015 and it was announced in March 2017 that they were married. There is no record of her having any children till now. The couple has been together for over five years now and their relationship is still going very well. There is no other record of her relationship.

Who is Alison Brie?

Alison Brie is an American actress and producer best known for playing Annie Edison in the NBC sitcom Community (2009–2015). She is also famous for playing Trudy Campbell in the AMC drama Mad Men (2007–2015). She currently voices Diane Nguyen on the Netflix animated series BoJack Horseman (2014–present).

Alison Brie was born as Alison Brie Schermerhorn on 29 December 1982, in Los Angeles County, California, USA. She is an American by nationality and is of mixed(Ashkenazi Jewish, Scottish, Dutch, English, German, Norwegian) ethnicity.

She is the daughter of Charles Terry Schermerhorn and Joanne Brenner. Her father is a musician and freelance entertainment reporter and her mother worked at a non-profit childcare agency. She has a sister named Lauren Schermerhorn. Her parents divorced while she was a child. She spent her childhood with her divorced parents.

Before fame, she worked as a clown at birthday parties and performed in theaters in California.

She was educated at South Pasadena High School. After high school graduation, she attended the California Institute of the Arts and graduated with a bachelor’s degree in theater in 2005. She also studied at the Royal Scottish Academy of Music and Drama in Glasgow.

Alison began her acting career at the Jewish Community Center in Southern California. She made her acting debut in movies in 2004 with a small role in Stolen Poem (2004). Her first television role was as Nina in an episode of Hannah Montana (2006).

She got her first big break as Trudy Campbell in the television series Mad Men (2007-2015). She appeared as Amber in The Deadliest Lesson (2008). She played Annie Edison in Community (2009-2015) for which she was nominated for the Critics’ Choice Television Award for Best Supporting Actress in a Comedy Series in 2012. She played Rebecca Fuller in My Alibi (2008-2009). She had roles in the movies like Raspberry Magic, Scream 4, The Five-Year Engagement, and No Stranger Than Love. She provides her voice for the role of Diane Nguyen in BoJack Horseman (2014-present).

Alison Brie: Salary and Net Worth

Throughout her successful career, she has accumulated a net worth of $10 million.

There is no rumor and controversy related to her personal life and professional career.