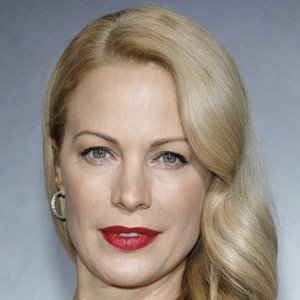 My dad wasn't around a lot when I was growing up and the only time I saw him was on the sets.

[on posing naked in Playboy magazine] I did it because I felt like okay, I am 30, I am in great shape, I feel like it's the prime of my life. I am not always going to look this way and feel this way and also, I really felt it was going to be a great help. Which it has been in a lot of ways to my clothing line. I didn't really do it because, oh, this is going to help my acting career.

I've never really tried to prove myself. I just try and do the best that I can. I don't think I am like a great actress. I think I am working towards trying to be better. I am working towards trying to be a good businessperson, a great clothing designer. I mean, you choose what you want to do in life and all you can do is try and be the best, but there is a process somewhere in the middle of that.

Alison Eastwood is a married woman. She has been married to a sculptor Stacy Poitras since March 15, 2013. The couple met the first time on the set of ‘Chainsaw Gang’ and got married after a 3 month long relationship. The event was organized in Calabasas California and it was a small ceremony. The couple has not welcomed any child till date but the couple seems to be enjoying their married life.

Previously, she was married to Kirk Fox from March 14, 1999, to January 28, 2000. Kirk is an American actor, stand-up comedian, and screenwriter. The reason behind their divorce was Alison’s extramarital affair.

She was also in a relationship with Michael Combs, frontman for the L.A. rock bands Cadillac Tramps and Back Alley Gators, died in a snowboarding accident on December 15, 2004, in Vail, Colorado. She also dated Chad McQueen, John Cusack, and Luke Wilson.

Who is Alison Eastwood?

Alison Eastwood is an American actress,

She attended Santa Catalina School in Monterey, California and Stevenson School in Pebble Beach. Later, she enrolled at UCSB to study acting but did not graduate.

She began her career from the movie ‘Bronco Billy’ at the age of seven, alongside Sondra Locke, Clint Eastwood, and others. She has also been featured in various European magazines and U.S. Vogue. In 2003, she posed nude for Playboy magazine.

Alison Eastwood has debuted her directing career from the movie ‘Rails & Tiles’ in 2007 starring Marcia Gay Harden and Kevin Bacon. She also has a clothing line called the Eastwood Ranch Apparel and she is also the founder of Eastwood Ranch Foundation, which is a non-profit animal welfare organization.

She was nominated for Panavision Spirit Award for Independent Cinema for ‘Battlecreek’ in 2016, and nominated for Young Artist Award in the category Best Young Actress in a Motion Picture- Musical, Comedy, Adventure or Drama in 1985.

She must have earned a huge sum of money from her professional career but she has not revealed it yet. However, many online sites have reported her net worth to be around $10 million. Her father Clint and sister Kimber Eastwood has an estimated net worth of $375 million and $225 million respectively.

There was a rumor that Alison and her ex-husband, Kirk Fox had problems since the initial phase of their marriage and the condition went worse which led to their divorce. But, she declined the question regarding the rumor.

She has a height of 5ft. 8 inches and weight is 59 kg. Alison Eastwood has green eyes and blonde hair. She has a tattoo of a rose on the back of her shoulder and a bracelet around her left wrist. Her body measurement is 34-25-34 inches. Her bra size is 34B.