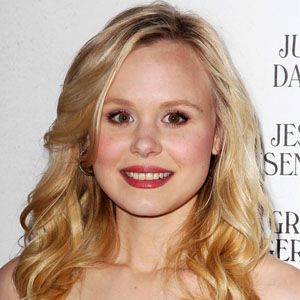 Have a kid. You obviously shouldn't have a baby just to get politically active, but I'm eight and a half months pregnant, and I swear, thinking about an actual very real future for a tiny person is a game changer

You only live once. Trying to do the right thing for other people often doesnt work out, and you have to follow your own path in order to make things work out best for everyone.

What is the relationship of Alison Pill?

Who is Alison Pill?

Alison Pill is a Canadian actress known for her remarkable work in various movies and series. Her breakthrough came with the television series The Book of Daniel.

Alison is a Canadian by nationality. She holds Estonian and Swedish ethnicity as her father belongs of Estonian descent.

Besides these, Alison has not disclosed many details about her family. Also, there are no details of her childhood.

As per Alison’s education, she did her schooling at Vaughan Road Academy. There she enrolled in the “Interact” program.

The program was designed for students interested in dance, music, athletics, and theatre.

Alison Pill started her professional career at the age of twelve. She appeared in various films and television series. At the age of 11, she played the guest role on the episode of kids series The New Ghostwriter Mysteries.

At 12, she landed roles in two TV movies and a mini-series. Also, she appeared as a guest on the TV series PSI Factor and voiced a character on an animated series.

In 1999, she featured her first role in the Canadian movie, The Life Before This. Later, she played in four TV movies.

In 2000, Alison Pill had a small role in the movie Skipped Parts. She played for the TNT network movie Baby.

She portrayed a lead role in the Canadian film The Dinosaur Hunter. Alison portrayed the role of Yong Loma for ABC- TV biopic Life with Judy Garland: Me and My Shadows in 2001.

In 2003, she played the role of Katie Holmes sister for the movie Pieces of April.

Later she had a lead role in the movie Fast Food High. Also, she landed a supporting role in the 2003 movie Confessions of a Teenage Drama Queen.

She portrayed the role of Grace Webster in NBC drama ‘The Book of Daniel’. In 2007, she worked for the movies Dan in Real Life.

In 2008, she had a supporting role in the Oscar-winning movie Milk. Pill was cast on U.S. TV series In Treatment.

Besides these, she had played in movies The Miracle Worker, Midnight in Paris, To Rome with Love.

In 2012 she starred in the short films with Denise, Chris Messina, and Santa Baby.

She appeared in Cover-Up by Satya Bhabha with Jason Ritter in 2016. In 2013, she starred in the film Snowpiercer.

She also appeared in HBO series The Newsroom. Alison played the role of Emma for film Zoom. She also starred in Goon: Last of the Enforcers as Eva Glatt.

In 2016, Pill co-starred with Jessica Chastain in the EuropaCorp thriller Miss Sloane. She joined the series American Horror Story: Cult in 2017.

Alison Pill: Net Worth and Salary

She deleted the picture right after it was posted. Alison quickly admitted to posting the snap, tweeting: “Yep. That picture happened. Ugh. My tech issues have now reached new heights, apparently.”

Alison has a height of 5 feet 5 inches. She has a body weight of 56kg.

Besides these, she has not been involved in any other social platforms including Facebook and Twitter accounts.