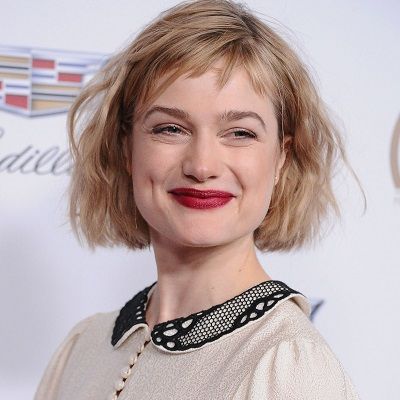 I found music a very non-feminine place to be in, so embracing this level of femininity has been a really interesting challenge for me. It really was difficult for me to go, ok I can be soft and feminine and strong and take care of myself and not lessen myself." I've enjoyed that quite a bit, I've enjoyed wearing heels and a dress every day and having these lovely curls and soft fabrics.

Alison Sudol is currently single. She was previously in a relationship with David Harbour. David is known as the director of the TV series Stranger Things.

The couple went public during this year’s Golden Globe night. Moreover, David even kissed Alison on the cheek before accepting his Critics’ Choice Award for Best Supporting Actor in Stranger Things.

In January, they were spotted together on a dinner date in West Hollywood. However, David previously romanced his Between Us Co-star Julia Stiles after ending his engagement with Maria Thayer, the State of Play-star in 2011.

Who is Alison Sudol?

Alison Sudol is an alternative singer-songwriter who goes by the name A Fine Frenzy. She has released singles like Almost Lover and Fever of the Dan in Real Life soundtrack.

She played a recurring role in the Amazon series Transparent. Moreover, she was cast on Dig, the USA murder mystery series.

Alison was born on 23rd December 1984 in Seattle, Washington, US. She is 35 years old at present. Her father’s name is John Sudol, and her mother’s name is Sandra West Moore. However, she had to go through her parents’ divorce when she was only five years old.

Likewise, Sudol grew up listening to a wide range of music, including Aretha Franklin, Ella Fitzgerald, and swing.

Alison graduated from high school at the age of 16. She was “nerdy and quiet” in school and was so nervous about going into college.

She fell in love with music as a teen and thus she took two years to find out what was going with music. At 18, she decided to pursue a career in music and she didn’t go to college.

On October 31, 2011, Sudol stated via Twitter that the band was mastering their record. Several song titles, including “Avalanches” and “Riversong”, were confirmed during Sudol’s appearance at the Sundance Film Festival.

In the March 2012 issue of Lucky magazine, she revealed the third albums were Pines. Previously scheduled for release in September 2012.

Along with Pines, she released an animated short film and a companion book illustrated by Jen Lobo. In September 2012, A Fine Frenzy was featured in a campaign called 30 Songs/30 Days.

Which support Half the Sky: Turning Oppression into Opportunity for Women Worldwide, a multi-platform media project inspired by Nicholas Kristof and Sheryl WuDunn’s book.

Afterward, Sudol stated that she will no longer perform as A Fine Frenzy, although she continues to write songs: “I put A Fine Frenzy to bed”.

In 2014, Sudol focused on her acting career and starred as Kaya in the recurring cast of the first season of Amazon Video series Transparent. Similarly, she also starred in the main cast of the television series Dig, as the archeologist Emma Wilson.

Elle named Sudol one of “The 7 Most Exciting Newcomers on TV this Season” in January 2015. In 2015, Sudol was cast in the film Fantastic Beasts and Where to Find Them, the first in a series of five Harry Potter prequel films written by J. K. Rowling.

Alison has often referred to the literary influences on her music. Recently she disclosed that she is also pursuing a second career as a writer. In an interview, Sudol said she is working a children’s story in the “Narnia” tradition, a fantasy featuring animals.

In an interview with Ladygunn magazine, Sudol revealed the title of her fantasy adventure book to be Three Sails and the Family Moss.

Alison was part of the 2016 movie Fantastic Beasts and Where to Find Them which made box office collection of $812.5 million. Sadly, The Last Full Measure made a collection of only $2.1 million.

Alison defended her character’s dark new direction in the second movie The Crimes of Grindelwald. It was a controversial decision of Queenie. Alison admitted that the decision made was not a form of manipulation.

Other than that, she has not been part of any rumors and controversy.

Alison has blue eyes with blonde hair. She stands 5 feet 6 inches tall and weighs around 52 kg.

You want to know more about education, salary, net worth, parents of  Chris Sullivan, Jordan Wiseley and Joe LoCicero