Allaroundaudrey has already found the love of her life. She disclosed that she is in a relationship in March 2020 through her YouTube video, Mystery Boyfriend Reveal.

Recently, on the 5th of August 2020, she revealed that she is engaged to her boyfriend, Spencer. Spencer proposed to her when they went hiking to make a hiking challenge video. 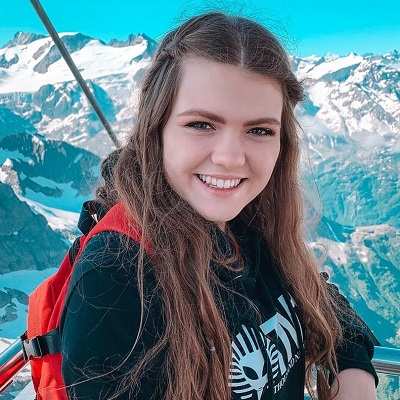 Allaroundaudrey is a YouTuber. She is renowned for the YouTube videos of her channel that went viral on the web.

She was born on the 15th of October 1999 in Florida, United States. As of 2021, she is 21 years old. Her birth name is Audrey William. She is of British-Irish ethnicity.

Her mother and father are also YouTubers as well. However, they have not shared their real name. They have the runs the YouTube channel, The YouTub3 Family- That Adventures.

She is the eldest among his three siblings including a sister, Jordan, and brothers; Jake and Ty. Her sister, Jordan owns her own YouTube channel, JustJordan33.

Also, her younger brothers, Jake and Ty share the same YouTube channel with the name, Jake and Ty.

Talking about her educational background, she is a high school graduate. Currently, she is attending college.

Since childhood, Allaroundaudrey was passionate about taking short videos. Also, she was a very active child who loved dancing, playing instruments, and ice staking.

Later, she became fascinated with the idea of mixing her talents and passion for making videos.

Moving forwards, in May 2014, she created her own YouTube channel. In the YouTube video, she started uploading the videos that she made when she was having fun.

Initially, she started her Youtube channel with some challenges and DIY videos. Such YouTube content gripped the attention of the people and went viral in no time.

Currently, her YouTube channel has around 2.07 million subscribers and more than 691 million views.

Apart from the main channel, she has a vlogging channel that she created on the 4th of June 2018. Through the YouTube channel, she shares her college life, life skills, and funny adventures. As of now, the channel has 198 videos with around 447k subscribers with more than 33.4 million views.

Recently, on the 24th of July 2020, she has joined a YouTube channel, Audrey and Spencer with her boyfriend, Spencer. Within no time, the channel has over 72.2k subscribers with more than 316k views.

Through the YouTube channel, she shares the beautiful moments of her relationship with her audiences.

As of now, she has managed to maintain her dignity as a YouTuber. To date, she has not been through any sort of controversy and scandals that created a buzz in the media.

Also, she has stayed far from any sorts of rumors too.

She has brown eyes with brunette hair. She stands at a height of 5 feet 5 inches and weighs 55 kg.

She also has a TikTok account with more than 1.7M fans.

You may also read the bio of Jackson Mecham, Abbie Ensign, and Chad Franke.