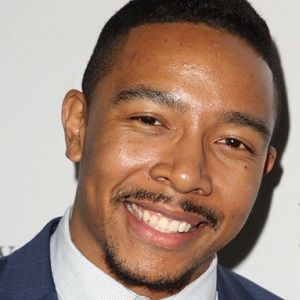 Allen Maldonado has not revealed anything about his relationship. As of now, he is single. There is no news of his dating anyone. He is busy focusing on his career rather than being in love and relationship.

Who is Allen Maldonado?

Allen Maldonado is an American actor and filmmaker. He is famous for his roles as Curtis in Black-ish and Bobby in The Last O.G.

Similarly, he is an entrepreneur and runs his own clothing line and an app called Everybody Digital. He is the executive producer of the 2018 film A Father’s Love.

Allen Maldonado was born on 20th May 1983 in Bellflower, California. He is the son of Allen M. Hood. But, there is no information about his father as he was raised by his mother due to his father’s death at a young age. Regarding his siblings, he has two elder sisters.

His nationality is American and his ethnicity is mixed of Afro-Puerto Rican and African-American.

Talking about his education, he attended his High School at Bellflower, California, United States. Similarly, he graduated from the University of California.

His first appearance was as a young street thug, Tyrone, in a PBS educational program called Madison Heights in the year 2002. After joining Bobbie’s acting studio, he portrayed the role of Juvenile Delinquent in his first hit on-screen movie Friday After Next in the year 2002.

Similarly, Allen Maldonado has appeared in several blockbuster movies. Moreover, his adroitness was displayed by his on-screen character, Curtis Miller, in Black-ish released on 24 September 2014.

At present, he has a recurring character, Jamal, on the Emmy award-winning soap opera “The Young and the Restless.” He also released four movies back in the year 2017 and they are First Match, Smartass, Quest, and Where’s The Money?

Likewise, he is a successful entrepreneur who is running a record company, ‘Get It Done Records,’ a production company, ‘Only Son Productions,’  and a T-shirt line, ‘Vineyards Phinest.’

He is an actor and entrepreneur with lots of appearances in lots of blockbuster hit movies. He does charity works as well.

Further, he has video game roles as well like in Prototype 2, Grand Theft Auto V, and Mafia III.

There is no information about the awards and nomination of Allen. But he acted in the award-winning sitcom Black-ish. He has not received any awards yet.

The net worth of Allen Maldonado is around $5 million dollars. He is the kind of person who does multiple works. So, he might earn a huge amount of money. But he has not revealed his salary and incomes.

Talking about Allen Maldonado’s body measurements, he has a height of 5 feet 7 inches and his weight is around 61 kg. His hair color and eyes color is both black.