(American actress and a famous model) 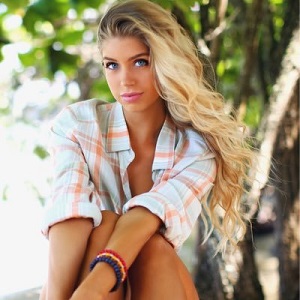 Allie is a young and aspiring model. Sexy blonde actress/model is in a committed relationship with American Professional baseball player. His name is Tyler Beede. Their beautiful moments can be seen regularly on her Instagram’s page. This does break hearts of a lot of her male fans for sure.

On how they met, she said that she followed him on Twitter and messaged back and forth before they met. He was recommended to her by her mom. They met for the first time in a game and had their first kiss on KISS CAM. The lovebirds are happily enjoying each other’s company and her social media posts are concrete proof of that.

Who is Allie DeBerry?

Texas-born Allie DeBerry is an American actress and a famous model. Allie is well-known among the media and the audience for her portrayal of Paisley Houndstooth in Disney series, “A.N.T. Farm”. She played the recurring role for 31 episodes from 2011 to 2013.

Allie DeBerry was born on October 26, 1994, in the community of Kingwood in Houston in the state of Texas. She possesses American nationality and her ethnicity is mixed( Czech/Bohemian and English).

Her father is Tom DeBerry and her mother name is Cindy De Berry. At the age of 7, she was featured in a TV film named, “The Way She Moves” in 2001. This pretty much sums up her early days that she was into the film industry from a young age.

She did modeling from a young age and featured in different commercials like Burger King, Barbie, etc.

Regarding her education, she attended Kingwood Park High School.

Allie DeBerry is one of those lucky children who get a break in movies from a young age. Her acting started when she made a guest appearance in TV film “The Way She Moves” in 2001. This fueled up her career. Afterward, the same year she went on to play the character of Brittany for the 16th episodes in “It’s a miracle”. Consequently, this boosted her experience section in her resume. Allie played many other minor characters in TV series and films.

She got her first major role in the Disney TV series, “A.N.T. Farm”. She played the character of Paisley Houndstooth from 2011 to 2013. She gave a pretty good performance. This landed her a ‘YA Awards’ nomination for “Best Performance in a TV Series – Recurring Young Actress” in 2013. Furthermore, she featured in TV series like “What’s the Word?”, “The Wannabes”, “Shake It Off”, “Suburgatory” and so on. Additionally, she acted in lots of films like “Love and Mary”, “Mission Air”, “Hoovey”, “Major Team”, and so on.

Allie DeBerry: Salary and Net Worth

Allie is a part of the film and modeling industry. This surrounds her with lots of media and public. Anything she does or says can turn into big topics. It could possibly turn into a rumor or controversies. So she likes to keep focusing on her career and keep her life apart from media.

Allie DeBerry has the height of 5 feet 5 inches. She has blonde hair and blue eyes. Furthermore,  her body figure measures 34-24-35 inches. Her body weighs 50kg and her shoe size is 7(US). Besides these, her bra size is 34C.