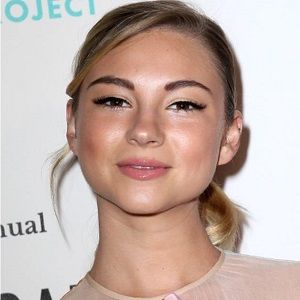 I don't know where I would be without music. Even if I wasn't a musician, I think music is God. In a lot of ways, it's my saving grave. It's been my religion since I was a little kid.

You can choose to be mad in a negative way where it fuels you to do mean, hateful things, or you can let your madness fuel your art and channel it in a positive way.

Allie Gonino is yet to get married. She hasn’t shared anything concerning her love life and affairs. Moreover, the talented actress, Allie seems to be secretive about uncovering her relationship status.

Who is Allie Gonino?

As an American actress, singer, and songwriter Allie Gonino whois also well known for her regular role as Laurel Mercer in The Lying Game and her recurring role as Michelle named 10 Things I Hate About You, both of which were ABC Family series.

Likely, Gonino was a member of the American girl group The Stunners between 2007 and 2011. Currently, Allie is in the band The Good Mad, who was featured in The Lying Game, in which Gonino also starred.

Allie Gonino was born in Rockwall, Texas, the United States on March 30, 1990. Her birth name is Alyssa Jean Gonino and she is currently 29 years old. Her father’s name is Dr. John Gonino and her mother’s name is Linda Gonino. Whereas, both of her parents own and operate Gonino Center for Healing in Heath, Texas.

Gonino is the youngest among her three half-siblings. Meanwhile, her sibling’s name is yet to reveal. Allie holds American citizenship and mixed (Italian- American- English- Irish- German-French Huguenot) ethnicity. Her birth sign is Aries.

Talking about Allie’s education history, during her high school, Gonino became deeply interested in musical theater. Later Allie dropped out of high school and move to Los Angeles and fully pursued a career in music and acting. Then, at the age of 16, she went to obtain the General Education Development (GED) degree.

During  2007, Gonino made her acting debut in the short film called Love. On the following year, she also appeared in the series Cory in the House as Monique.

Similarly, in 2011, she played the role of Laurel Mercer in the series The Lying Game, from 2011 to 2013. Recently, Allie also starred in the film Geography Club as Kimberl.

Allie has also worked in movies including Geography Club, See You in Valhalla, High Voltage. Moreover, she has also starred in Television series such as 10 Things I Hate About You, The Lying Game, Scorpion and few more.

Therefore, Allie has also portrayed the character of Lady Guinevere in the episode, A Ranger in King Arthur’s Court in the web series, Power Rangers Workforce.

She has an estimated net worth of around $1 million which she has earned from her professional career.

Allie Gonino has a height of 5 feet 4 inches. Additionally, she weighs is 55Kg. In addition, she has a measurement of 34-24-35 inches and bra size is 34B. Furthermore, Allie’s hair color is blonde and her eye color is brown.

Also, read the affair, salary, the net worth, controversy, and the bio of Kimberly Beck, Christa Campbell, Danielle Bisutti