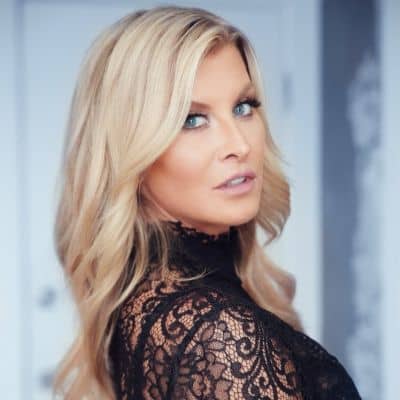 Professionally, Allison Dunbar is in a relationship with Ron Perlman. Ron is a well-named American actor and voice actor known for his roles in the del Toro films Cronos(1993), Blade II(2002), and Pacific Rim(2013).

The couple was recently found kissing in a public place. The duo got high attention after their scene was spotted.

Previously, she was married to Sean O’Donnell. The former couple tied the knot in June 2001. They had a daughter named Ernie. However, they separated in the year 2004.

Who is Allison Dunbar?

Allison Dunbar is a well-recognized American actress, model, and television star. Dunbar is widely famed for her role in StartUp(2016), Quick Draw(2013), and 2 Broke Girls(2011).

Moreover, she has recently gained high attention after kissing her StarUp co-star Ron Perlman after a dinner together.

Allison Dunbar was born on 31 July 1972. At present, her age is 49 years old. Likewise, her birthplace is Delaware, the USA.

Allison is the daughter of her father, Timothy Barron whereas her mother is Wendy Barron. Moreover, he has a brother named Christopher Barron. Her father was a Delaware deputy attorney general.

Talking about her nationality, Dunbar holds an American identity whereas her ethnicity is Caucasian.

Allison developed an interest in acting from an early age. Professionally, Dunbar made her debut role in the TV industry with the TV series, Law & Order in the year 1994. She then started getting offers from many producers.

Additionally, the star featured as Susan in the TV series, 2 Broke Girls. She gained her career highlighting praise and admiration from her performance from the series. Dunbar was highly appreciated by her fans and followers.

After her several failures, Dunbar joined the comedy improv troupe, The Groundlings, got fulfilled.

She worked alongside Ron Perlman in the gritty Sony Crackle drama StartUp. She has also featured in Criminal Minds, CSI, Drake & Josh, 2 Broke Girls. Allison is also the creator of the burlesque shoe, Smokeshow.

A prominent star, Dunbar has earned decent money from her profession. Her main source of income is from the film industry.

Allison has never been part of any controversial matter or rumors till now. Dunbar has been preoccupied with her professional and private life.

It seems that Dunbar prefers enjoying her personal life and does not want to merge it with her professional life.

49years old star, Allison has gorgeous looks and an admirable personality. She stands at a height of 5 feet 8 inches. Also, she has a balanced body weight of 60 kg.

Furthermore, Dunbar has blue eyes whereas her hair is blonde. Her body measurement is 38-25-36 inches(chest-waist-hips) respectively.

The star wears a bra size of 34D and her shoe size is 7 inches(UK).

Regarding her social media presence, Allison Dunbar is an active personality on social media. Allison has more than 46.2k followers on her official Instagram account @allisondunbar.