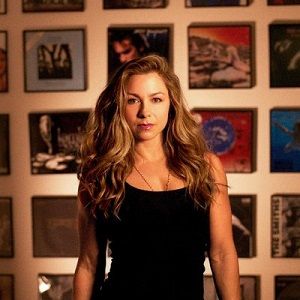 Since she is focused on her career, she has not been engaged in any sorts of relationship at the current time. She might be dating a successful celebrity in the coming days.

She has not revealed about her past relationship to the media. So, she might be living a single life.

Who is Allison Hagendorf?

Allison Hagendorf is a national live TV announcer, music journalist, radio and television personality, and voice actress. She is popular as Live Announcer for the MTV Video Music Awards and the MTV Movie Awards, and the Global Head Of Rock for Spotify.

The Music Journalist Allison was born in the United States of America on March 5, 1982. There are no data and records regarding her family and childhood currently available since she has kept those information private and far from the media.

There are currently no data and records available about her educational background since she has not revealed it to the media and kept it private.

First of all, the voice actress Allison started her entertainment career at Epic Records and Sony Music’s Columbia Records in A&R.  She had received new talent globally. She also had seen the album production for many artists including Lamb of God, whose single “Redneck” received a Grammy nomination for “Best Metal Performance” and the metal band.

Moreover, she started working in the studio interviewing the bands on-camera.  She then worked as a host for the live primetime music competition show on The CW Network, “The Next”. The Hip-hop icon Queen Latifah had executively produced the show. The music video was featured with superstar mentors as Joe Jonas, Gloria Estefan, Nelly, and John Rich.

Furthermore, Allison also had appeared as the main host on Fuse. She had to host numerous shows including “Grammys Live,” and “Top 20 Countdown”. The Radio personality also had traveled across the country. She had covered national music festivals such as Warped Tour, Bonnaroo, Lollapalooza, and SXSW Music Festival with Fuse.

Another, she appeared in the first-ever live television broadcast of both The Stagecoach Festival for AXS TV and The New Orleans Jazz & Heritage Festival as a host. Additionally, She appeared in “Music Fridays” with a supermodel, Chrissy Teigen, on MSG Network as a co-host of the program.

In addition to, she has run several shows on both The Cooking Channel and VH1. Another, the voice artist Allison also had become Live Announcer for different award shows and concerts including both the Z100 Jingle Ball and the MTV Music Awards and Movie Awards.

Currently, there are no records and data available regarding her lifetime achievements and awards since she has not mentioned to the media.

Allison Hagendorf: Salary and the Net worth

The actress Allison is supposed to earn the decent amount of salary from her career. She has an estimated net worth of $10 Million that she earned through her hard work and profession.

There are currently no records and data available regarding her rumors as she is keeping her personal life far from the media.

The TV personality’s body measurement is currently not available. She has been maintaining her body properly and in a balanced way with a height of 5ft and 3 inches. She has got brown hair color and brown eyes.